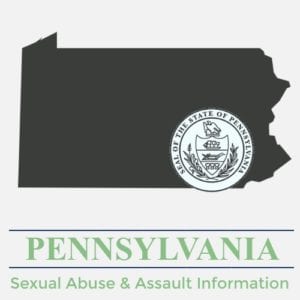 Pennsylvania passed new legislation in December of 2019, improving the laws for survivors of sexual abuse. Below you will find more information on Pennsylvania’s statute of limitations laws. These laws are important because they dictate how long a lawyer handling a Pennsylvania sexual assault case has to file a claim on behalf of a survivor. In addition, we’ve compiled a list of Pennsylvania settlements and jury awards received by sexual abuse and assault survivors.

Pennsylvania was previously viewed as one of the least friendly states when it came to its statute of limitations laws (SOLs) for sex crimes against minors. However, PA legislators in November of 2019 reformed the childhood sex abuse laws. Of the 4 new recommendations set forth by the government, 3 new bills were passed and signed into law. Read more below.

In 2005 Pennsylvania extended its SOL to age 50 for crimes related to sexual abuse involving a minor, but prior to the November 2019 reforms, was one of the only states that hadn’t eliminated it completely for felonies. The new bill abolishes the state’s criminal SOL on future cases of childhood sexual abuse. The other bill signed into law, also related to the criminal SOL, was aimed at penalizing those who are considered ‘mandated reporters.’ Under the new law those who fail to report child abuse to law enforcement can be prosecuted. Child USA, who has evaluated every state based on their criminal statute of limitation laws, gave Pennsylvania a Criminal SOL score of 3, on a 1-5 scale, where 5 is the highest. A score of 3 is defined as a criminal SOL eliminated for felonies only.

The November 2019 bills also extended the civil SOL for childhood sex abuse from age 30 to age 55. The one recommendation that was not passed into law involved adding a 2-year revival window that would have allowed older victims, whose claims were previously time-barred due to SOL, to file civil suits. Those opposed argued that doing so might be unconstitutional and therefore could open up the legislation to a lengthy court battle.

That said, advocates for this window have not given up. Their new plan to avoid the unconstitutionality of the bill is to amend the constitution itself. While both the House and Senate have approved the amendment, they both must pass this same legislation 2 years in a row. If approved a second time, the earliest it would go onto the ballot for voters is 2021.

Child USA, who has also evaluated every state based on their civil statute of limitation laws, gave Pennsylvania a Civil SOL Age Cap score of 4, on a 1-5 scale, where 5 is the highest. A score of 4 is defined as a civil SOL age cap for survivors age 50 and older.

It is estimated that the Dioceses in Pennsylvania have paid out over $84,000,000 in compensation to survivors of sexual abuse and molestation at the hands of its clergy. Some of those settlements are outlined below.

April 1994 – A jury awarded $1,570,000 to a 26-year old plaintiff who accused former priest Francis Luddy of molesting him over a 6-year span. The Altoona-Johnston Catholic Diocese, retired Bishop James Hojan, and Luddy were all found liable. This award led to over a decade of appeals. In September of 1996 the verdict was overturned by the state superior court, but in 2000 the decision was affirmed by the Supreme Court. Then in 2000, the Superior court ruled against punitive damages, knocking the award against the church down to ~$800,000. Almost 5 years later, the Supreme Court ruled that the Superior court erred in disallowing the punitive damages, and as a result, in 2006 the Superior Court ruled that the Diocese must pay the $1,7000,000 owed in punitive damages. Note that the delay in paying damages increased the overall settlement amount to $2,569,000.

May 2005 – The Diocese of Altoona-Johnstown agreed to pay $3,700,000 to 21 victims of child sex abuse at the hands of priests and a school teacher. In addition, $210,000 of that settlement will go to treatment and counseling for the victims. Those named included Rev. Robert Kelly , a former priest at Our Lady of Victory Church in State College. The other names of the priests were not released.

December 2019 – As of December 2019, the Roman Catholic Dioceses in Pennsylvania reported that they have collectively paid out over $84,000,000 to 564 survivors of sexual abuse.

*The settlements listed above are offered for educational purposes only and do not guarantee any future outcome or settlement. Each legal situation is different, and past performance does not guarantee future results. We do not maintain that is a full list of all settlements in the state of Pennsylvania but merely a grouping of those we choose to share on our website. Please contact us if you would like additional settlements included or if you notice any inaccuracies on our site. We strive to provide our viewers the most up to date and accurate information as possible.

In November of 2018, seven of the eight dioceses in Pennsylvania launched a victim’s compensation fund, allowing survivors a small window to apply and receive compensation through the church without having to file suit, and without exception to those whose statute of limitations may have already passed. The fund, run by Kenneth Fienberg, is said to have paid out an average of $148,000 per victim, but no one payment was to exceed $500,000. As of December of 2019, it’s estimated that 1,500 claims have been submitted, 500 reviewed, and 391 settlements paid out.

At the end of September 2019, the Archdiocese of Philadelphia, along with the Diocese of Pittsburg, Scranton and Allentown closed applications on their victim compensation fund.

Devereux, headquartered in Philadelphia, Pennsylvania, has been accused of multiple incidents of sexual abuse by its staff members.Click the headline to read more…

Attorney Derek Braslow has filed a suit against the Diocese of Erie for fraudulent concealment stemming from years of covering up clergy sexual abuse. Click the headline to read more…

Josh Shapiro, head of Pennsylvania’s Office of Attorney General, is proud of the work done by his office to help protect survivors of sexual abuse in Pennsylvania. Click the headline to read more…

Diocese of Scranton Accused of Covering Up Years of Sexual Abuse

A lawsuit was filed against Bishop James Timlin and Bishop Joseph Bambera for their part in covering up years of alleged sexual abuse by priests in the Diocese of Scranton. Click the headline to read more…

The altar boy claims that the diocese failed to protect him from the abuse even after knowing his abuser, Reverend Robert G. Cofenas, was a pedophile. Click the headline to read more…

While over $13 million has been paid to over 100 childhood sexual abuse victims by the Harrisburg Diocese, church officials believe there may be more than 200 additional survivors who could bring claims; sparking the Diocese to file for bankruptcy protection. Click the headline to read more…

Many believe that the grand jury report that released the names of 300 credibly accused Pennsylvania clergy gave the state some much needed momentum to help both lawmakers and sexual abuse survivors. Click the headline to read more…

Altoona-Johnstown Diocese Still on the Hook After Superior Court Decision

A lawsuit filed by a woman who claims she was repeatedly molested by her priest in the 1970s and 1980 was reinstated after a court originally dismissed the case due to statute of limitations issues. Click the headline to read more…

Josh Shapiro, the Attorney General in PA, is gathering evidence which he believes will prove repeated cover ups of child sexual abuse within the Jehovah’s Witness Church. Click the headline to read more…