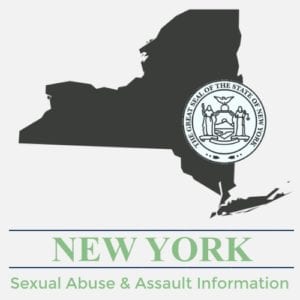 Due to the passing of the Child Victim’s Act in August of 2019, New York is noted for being one the most victim friendly states in the country with regards to sexual abuse and assault laws. Its efforts to change legislation has helped survivors of sexual abuse get justice against their abusers in the courts, and also allows for compensation. These laws enable lawyers handling sexual abuse claims in New York to file cases against sexual predators, including clergy members, and the Catholic church.

Below you will find New York Lawsuits News & Updates, as well as additional information on New York’s statute of limitations laws. These laws are important because they dictate how long a lawyer handling New York sexual assault cases has to file a claim on behalf of a survivor. In addition, we’ve compiled a list of New Yorks’s settlements and jury awards received by sexual abuse and assault survivor and a list of New Yorks’s ‘credibly’ accused priests released by the dioceses.

New York is one of the few states in the country that has enacted a revival window; allowing previously expired claims of sexual abuse to be brought against abusers. The law dubbed The Child Victims Act, originally gave survivors until August 14th, 2020 to file a claim. However, on August 3, 2020 Governor Andrew Cuomo extended the deadline to file a claim to August 14, 2021, giving survivors with expired claims even more time to come forward and seek justice.

While the Child Victims Act has done a lot to allow expired claims to proceed, New York has made other efforts to reform its criminal and civil statute of limitation laws (SOLs).

In 2019 New York made several improvements to its criminal statute of limitation laws. It removed the SOL for 1st degree incest, moved the age to 43 for rape and criminal sexual acts in the 2nd degree, and 33 for those in the 3rd degree. All other felonies have a SOL of age 28 and misdemeanors is age 25. In 2020, New York has continued its efforts to improve criminal SOL laws by introducing three more bills to help sexual abuse survivors. Child USA, who has evaluated every state based on their criminal statute of limitation laws, gave New York a Criminal SOL score of 3, on a 1-5 scale, where 5 is the highest. A score of 3 is defined as a criminal SOL eliminated for felonies only.

While New York still does not have a discovery rule which would allow the SOL to ‘begin’ when a diagnosis or connection to the abuse is made, New York has been a leader in statute of limitation law reform aimed at helping survivors of sexual abuse. The Child Victims Act not only opened a revival window for previously expired claims, but it also extended the civil SOL for claims of sexual abuse to age 55. Furthermore, it allows for suits against any party, including perpetrators, and public or private institutions. In August 2020, New York extended the revival window for a second time, pushing out the closing date to August 14, 2021.

Child USA, who has also evaluated every state based on their civil statute of limitation laws, gave New York a Civil SOL Age Cap score of 4, on a 1-5 scale, where 5 is the highest. A score of 4 is defined as a civil SOL age cap for survivors age 50 and older. Additionally, Child USA gave New York a related SOL Revival Law score of 3 on the same 1-5 scale. A score of 3 is defined as a revival window or revival up to age 30-54, for claims against perpetrators and private organizations.

If you or someone you love was sexually abused or assaulted in New York, contact us now. Due to New York’s revival window, those sexually abused as a minor likely still have a claim against their abuser, no matter how long ago the abuse occurred. Even if the abuser is deceased, you may still have a claim against the organization responsible. Don’t wait to file your claim. New York’s current revival window is set to close on August 14, 2021.

It is estimated that the Dioceses within New York state have collectively paid out over $100 million to survivors of childhood sexual abuse at the hands of its clergy. Below outlines the timeline of some of those settlements.

May 2007 – A jury in Long Island awarded two survivors $11,450,000 after hearing testimony related to rape by their former youth minister starting in the late 1990s. The jury found the Diocese of Rockville Centre, St. Raphael’s Church in East Meadow and its pastor all negligent in hiring Matthew Maiello . Maiello later served two years in prison for statutory rape related to the two victims.

September 2018 – The Brooklyn Diocese reached a settlement with 4 boys for $27,500,000 who were abused by Angelo Serrano beginning in 2003. The abuse was said to have happened over a six-year span and occurred at St. Lucy-St. Patrick Church offices, Serrano’s apartment and a brick schoolhouse converted to low-cost housing by Catholic Charities. In 2011 Serrano was sentenced to 15 years in prison.

September 2019 – The Roman Catholic Diocese of Rochester filed for Chapter 11 Bankruptcy after a number of sexual abuse lawsuits were filed against them. According to a New York Times article, the Rochester Diocese has assets estimated between $50-100 million, while its financial liabilities range from $100-500 million. That said, typically in order for a court to approve the bankruptcy, a settlement fund will need to be created, and adequately funded by the diocese for current and future sexual abuse survivors.

*The settlements listed above are offered for educational purposes only and do not guarantee any future outcome or settlement. Each legal situation is different, and past performance does not guarantee future results. We do not maintain that is a full list of all settlements in the state of New York but merely a grouping of those we choose to share on our website. Please contact us if you would like additional settlements included or if you notice any inaccuracies on our site. We strive to provide our viewers the most up to date and accurate information as possible.

The Archdiocese of New York has released the following list of priests, deemed to have been credibly accused of sexual abuse of a minor. According to their website:

“credibly accused” means that archdiocesan officials have determined, following a review of available and accessible files, that one or more of the following exists:

For cases where the priest listed to not meet the criteria for ‘credibly accused’, or a final decision has not yet been made, the Independent Reconciliation and Compensation Program (IRCP) may have determined the claims made against a particular priest were eligible for compensation. For those in this category, please note:

How Long Do You Have to File Claim Against the Diocese of Buffalo?

A federal bankruptcy Judge sets the deadline for submitting sex abuse claims against the Diocese of Buffalo. Click the headline to read more…

Taking an approach used by several dioceses outside New York previously, the Diocese of Rochester followed suit and became the first New York Diocese to file for Chapter 11. Click the headline to read more…

Lawyers for clergy abuse survivors are fighting to make sure the Diocese of Buffalo is properly maximizing property values, the proceeds of which would help fund compensation programs for survivors. Click the headline to read more…

The Diocese of Ogdensburg, which covers the northern part of New York, faces 20 new clergy abuse lawsuits. Click the headline to read more…

In what many believe is a growing effort to limit payouts to sexual abuse survivors, the Diocese of Syracuse files for Bankruptcy. Click the headline to read more…

Over 50 Clergy Abuse Lawsuits Filed Against Diocese of Albany

After nearly three months of courts being closed due to Covid-19, they reopened to a flood of new lawsuits, including over 50 against the Diocese of Albany. Click the headline to read more…

With the reduction of court services, New York’s governor and legislators extended the deadline for filing a childhood sexual abuse claim under the Childs Victim Act. Click the headline to read more…

The Diocese of Buffalo is blaming the Child Victim’s Act, which gives sexual abuse survivors a revival window to file previous expired claims, as the primary reason for filing for bankruptcy. Click the headline to read more…

Expect delays in Clergy Abuse Compensation from the Dioceses of Buffalo

The judge of the Supreme Court of Erie Country doesn’t dispute compensation should be paid to clergy abuse victims. However, with the Buffalo Diocese filing for bankruptcy protection, delays in payouts are inevitable. Click the headline to read more…

In August of 2019, New York legislature passed the Child Victims Act which allows survivors of childhood sexual abuse a one-year window to file a lawsuit against their abusers and the institutions responsible. Click the headline to read more…

With the passing of the Child Victims Act, New York has gone from one of the worst states to one of the best states to file a childhood sexual abuse lawsuit. Click the headline to read more…

While the Diocese of Buffalo is set to pay out $17.5 million to compensate victims of priest molestation, many say it’s not enough. Click the headline to read more…

Three sexual abuse survivors testified in an Albany court that they were abused by more than 80 clergy from the Albany Diocese. Click the headline to read more…