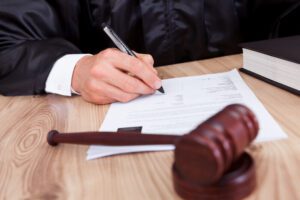 A ruling by a federal bankruptcy judge will allow clergy sexual abuse survivors to move forward with lawsuits against the Diocese of Rochester.

When New York state passed the Child Victims Act in 2019, the Diocese of Rochester was the first New York diocese to file for chapter 11 bankruptcy protection. The diocese claimed that the pending liabilities it faced due to child sex abuse claims, far outweighed diocese assets at the time. Filing for bankruptcy put any chance for survivors to file individual lawsuits on hold. After years of failed negotiations at a settlement, it appears the judge will now allow individual lawsuits against the diocese and parishes to move forward.

Survivor Jim Cali was abused by two priests when he was a young student back in the 1970s. Like most survivors of child sexual abuse, Cali said it took him decades to face the repressed memories of his abuse. He was finally ready to share his story of abuse and filed a lawsuit against his abusers when New York passed the Child Victims Act. Cali was upset when the diocese filed for bankruptcy soon after. “We waited all these years for the Child Victims Act to go into effect,” said Cali. “When it did, we thought we had a clear path for justice in the court. Then, the rug was pulled out when the diocese filed for bankruptcy.”

Cali is concerned that the diocese is stalling on all fronts, since most clergy abuse survivors are older adults. “More time helps the diocese, because this drags it out, and some of us will pass away, and that might be part of their strategy,” he said. However, the judge’s ruling will allow the cases to move forward and now survivors’ stories of clergy abuse can be heard. Settlement negotiations will continue between the diocese and survivors, and perhaps, this ruling will spur the diocese to make a concerted effort to make a reasonable offer.

Sexual Abuse Lawyer for New York Clergy Abuse Victims
If you or a loved one were a victim of sexual abuse within the New York Dioceses, contact our firm today. Our law firm handles New York sexual abuse lawsuits and can help you understand how long you have to file a clergy abuse claim in the state of [enter state]. Call us now at 1-800-941-7209 for a FREE and PRIVATE consultation.