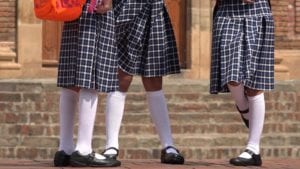 The court filing revealed that Pastor Bernardo would regularly spend time alone with children of the parish and school to mentor, discipline, and counsel them. According to the filing:

Beginning in or about 1964, when plaintiff was 5 years old, Msgr. Bernardo routinely took plaintiff out of her classroom at defendant Holy Trinity School and brought her into a bathroom and to another area on school or church premises where he could be alone with her . . . At the aforementioned time and place, Msgr. Bernardo engaged in unpermitted, forcible and harmful sexual contact with plaintiff. This sexual abuse, which was a regular and repeat occurrence until approximately 1968-1969, occurred on the premises of defendants Holy Trinity Church and Holy Trinity School. Plaintiff’s relationship to defendants as a vulnerable child and student, and the culture of the Catholic Church which defendants endorsed, put pressure on plaintiff not to report the sexual molestation and abuse.

This lawsuit against the Holy Trinity Roman Catholic Church and the Diocese of Buffalo goes further and targets officials who knew, or ignorantly dismissed, the idea that Pastor Bernardo was committing sexual abuse against children in the parish community and attending Holy Trinity School.

Unfortunately, this isn’t the first time news regarding sexual abuse committed by priests within the New York Diocese has come to light. Again, we see the disturbing and over-arching theme of a Catholic Church sexual abuse ‘cover-up’ policy implemented by the church for decades. Now, with the help of the newly passed Child Victims Act in the state of New York, victims of priest sex abuse can seek justice.

If you or a loved one were a victim of sexual abuse within the Diocese of Buffalo or any other New York Diocese, contact our firm today. Our firm handles New York sexual abuse lawsuits and can help you understand how long you have to file a clergy abuse claim in the state of New York. Call us now at 1-800-941-7209 for a FREE and PRIVATE consultation. Don’t wait; your time to file a claim may be limited.