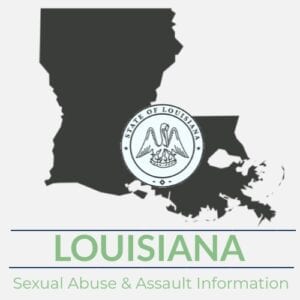 Louisiana recently reformed its civil statute of limitations (SOL) laws for child sex abuse claims and opened a 3-year revival window for previously expired claims against any type of defendant. These changes will allow sexual abuse survivors to come forward when they are ready and provide a window to seek compensation for those who have waited years to pursue justice but were told it was too late to file their claims. Civil SOL laws enable lawyers handling sexual abuse claims in Louisiana to file cases against sexual predators, including clergy members, and the Catholic Church.

Below you will find Louisiana lawsuits news & updates, as well as additional information on Louisiana’s statute of limitations laws. These laws are important because they dictate how long a lawyer handling Louisiana sexual assault cases has to file a claim on behalf of a survivor. In addition, we’ve compiled a list of Louisiana settlements received by sexual abuse and a list of Louisiana’s ‘credibly’ accused priests released by Louisiana’s Dioceses.

Louisiana’s recent reform of its civil statute of limitations (SOL) laws gives sexual abuse survivors a much better avenue to pursue civil justice against their abusers. A 3-year revival window was also opened against any type of defendant, giving those whose claims may have been previously expired a chance to seek justice as well.

In Louisiana, there is no criminal SOL for aggravated and forcible rape. The criminal SOL for most felony sex offenses against minors is age 48 and for misdemeanors it is two years from the offense. Louisiana does have a DNA evidence rule which allows felony and misdemeanor sex offenses to be prosecuted 3 years after the offender is identified by DNA. Child USA, who has evaluated every state based on its criminal statute of limitations laws, gave Louisiana a Criminal SOL score of 3, on a 1-5 scale, where 5 is the highest. A score of 3 is defined as a criminal SOL elimination for some/all felonies only.

In 2021, Louisiana eliminated its civil SOL for child sex abuse claims against all defendants. It also opened a 3-year revival window for previously expired child sex abuse claims against perpetrators, other individuals, private organizations and the government. Child USA, who has also evaluated every state based on its civil statute of limitations laws, gave Louisiana a Civil SOL Age Cap score of 5, on a 1-5 scale, where 5 is the highest. A score of 5 is defined as no civil age cap or elimination of the SOL.

Additionally, Child USA gave Louisiana a related SOL Revival Law score of 4 on the same 1-5 scale. A score of 4 is defined as a revival window for 2 or more years or revival up to age 55, for claims against perpetrators, individuals, private organizations and government.

If you or someone you love was sexually abused or assaulted in Louisiana, contact us now. Due to Louisiana’s current revival window, those sexually abused as a minor may still have a claim against their abuser, no matter how long ago the abuse occurred. Even if the abuser is deceased, you may still have a claim against the organization responsible.

To learn more about the process of filing a sexual abuse claim, click here.

February 1986 – A jury awarded an 11-year-old boy and his parents $1.25 million for the sexual abuse he suffered at the hands of Rev. Gilbert Gauthe. The boy’s parents said sexual abuse by the priest caused him to have severe emotional problems. Prior to the civil lawsuit, Gauthe pleaded guilty to 33 counts of sexual molestation of altar boys and was sentenced to 20 years in prison.

December 1987 – The Catholic Diocese of Lafayette was ordered by a jury to pay $1.8 million to the family of a former altar boy who was sexually molested by Rev. Gilbert Gauthe. The boy told the jury he was sexually abused more than 30 times when he was an altar boy at St. John’s Catholic Church in Henry, LA.

1983-1990 – During this time, the Catholic Diocese of Lafayette and its insurers paid out more than $18 million to 34 victims of Rev. Gilbert Gauthe. Despite being sentenced to 20 years in prison in 1985, Gauthe was released in 1995 for good behavior. He was then arrested in 1996 in Texas for forcibly fondling a 3-year-old boy.

The settlements listed above are offered for educational purposes only and do not guarantee any future outcome or settlement. Each legal situation is different, and past performance does not guarantee future results. We do not maintain that is a full list of all settlements in the state of [State] but merely a grouping of those we choose to share on our website. Please contact us if you would like additional settlements included or if you notice any inaccuracies on our site. We strive to provide our viewers the most up to date and accurate information as possible.

Catholic Dioceses in Louisiana have released the names of priests and clergy members who they deemed to be ‘credibly accused’ of sexual abuse of a child.

The lists below will be updated as litigation or investigations are concluded so that new names of credibly accused priests in Louisiana can be added.

The FBI is using the century-old anti-sex trafficking Mann Act to go after predator priests in New Orleans. Click the headline to read more…

Louisiana opened a three-year revival window which gives sexual abuse survivors with expired civil claims the ability to file claims against their abusers. Click the headline to read more…

A bill extending the statute of limitations for survivors of sexual abuse passed the Legislative Committee and is on its way to the House of Representatives. Click the headline to read more…

A bill which would remove the civil statute of limitations and open a 3-year revival window for child sex abuse victims passes unanimously in the Louisiana Legislature. Click the headline to read more…