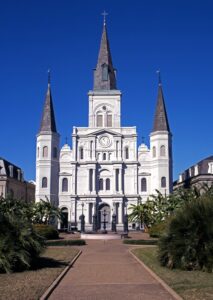 Prior to Louisiana opening a three-year revival window for child sexual abuse victims, the Archdiocese of New Orleans already filed for bankruptcy protection due to the mounting number of clergy sexual abuse claims being filed against it. Since filing for bankruptcy, the Archdiocese has consistently argued that it should be allowed to keep paying retirement benefits to ALL living clergy, including those on the list of priests credibly accused of sexually abusing a minor. Grabill, however, ordered that any priest on the credibly accused list should not get monthly stipends, but could continue to receive medical benefits.

In February of 2022, the judge ordered the Archdiocese to produce the previous 10 years’ worth of internal records. The records were to include personnel files, Review Board findings, law enforcement referrals, and any other information maintained by the Archdiocese regarding any priest or lay person accused of sexual abuse. When lawyers for clergy sexual abuse survivors saw these records, they argued the records “substantiate credible accusations of sexual abuse committed by five priests.” These five priests were never included on any credibly accused list and, therefore, continued to receive full retirement benefits. Based on this information, Judge Grabill ordered those payments to cease.

The church’s main argument in having to continue to financially support abusive priests is that canon law, or church law, dictates that it does. Only priests who have been laicized, or stripped of their ordination as priests, lose their pension benefits. Local dioceses cannot laicize a priest, only the Vatican can make that decision and none of the five priests here have been laicized. The judge was obviously not swayed by this argument when she handed down her ruling.