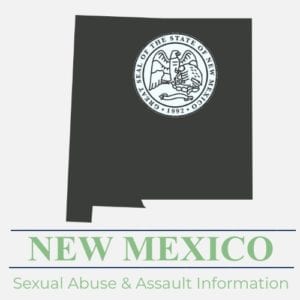 New Mexico is making some efforts to change its statute of limitation laws to allow survivors of sexual abuse and assault to get justice against their abusers, while also allowing for compensation. These laws enable lawyers handling sexual abuse claims in New Mexico to file cases against sexual predators, including clergy members.

Below you will find New Mexico lawsuits news & updates, as well as additional information on New Mexico’s statute of limitations laws. These laws are important because they dictate how long a lawyer handling an New Mexicon sexual assault case has to file a claim on behalf of a survivor. In addition, we’ve compiled a list of New Mexico’s settlements and jury awards received by sexual abuse and assault survivors and a list of New Mexico’s ‘credibly’ accused priests released by the dioceses.

New Mexico is one of many states introducing reform bills to change its current statute of limitation laws (SOLs) for child sex abuse claims. If passed, these reforms would give survivors of sexual abuse more time to file claims. A highlight of the proposed reform would be a revival window for expired claims against perpetrators to help sexual abuse survivors.

In New Mexico, there is no SOL for 1st degree felonies. The SOL for all other crimes is 3 to 6 years depending on the offense. For the crime of sexual penetration, if DNA is collected the SOL will only start running once a match is found. Child USA, who has evaluated every state based on their criminal statute of limitation laws, gave New Mexico a a Criminal SOL score of 3, on a 1-5 scale, where 5 is the highest. A score of 3 is defined as a criminal SOL eliminated for felonies only.

In 2022, New Mexico introduced an important bill to the state’s Legislature for sexual abuse survivors. First, it would eliminate the civil SOL for all childhood sexual abuse claims. Second, the bill would open a permanent revival window for expired claims that are not currently pending, as well as open a 2-year revival window for expired claims that are pending or were previously dismissed on SOL grounds. Child USA, who has also evaluated every state based on their civil statute of limitation laws, gave New Mexico a Civil SOL Age Cap score of 1, on a 1-5 scale, where 5 is the highest. A score of 1 is defined as a civil SOL age cap of 25 years old and younger for survivors.

If you or someone you love was sexually abused or assaulted in New Mexico, contact us now. Recently introduced reform bills could allow those sexually abused as a minor in New Mexico to file a claim against their abuser, no matter how long ago the abuse occurred. Even if the abuser is deceased, you may still have a claim against the organization responsible. Don’t wait to file your claim!

In 2004, Rev. Michael J. Sheehan, then Archbishop of Santa Fe, issued a statement saying that 44 priests connected to the Santa Fe Diocese had been credibly accused of sexual abuse and resulted in the diocese paying over $30,800,000 in settlements. Only about $7,700,000 of that money came from the diocese itself, the rest was covered by insurance.

June 2016 – The Diocese of Gallup was ordered to pay $21,000,000 to 56 survivors of sexual abuse by a federal bankruptcy judge and brought an end to the three-year case. Some of the abuse occurred as long as 60 years ago. Rev. Clement Hageman was named as an abuser, but the Diocese said it was not going to release the records surrounding the abuse to protect the names of other victims who did not wish to have their names be made public.

*The settlements listed above are offered for educational purposes only and do not guarantee any future outcome or settlement. Each legal situation is different, and past performance does not guarantee future results. We do not maintain that is a full list of all settlements in the state of New Mexico but merely a grouping of those we choose to share on our website. Please contact us if you would like additional settlements included or if you notice any inaccuracies on our site. We strive to provide our viewers the most up to date and accurate information as possible.

The Diocese of Santa Fe and the Diocese of Las Cruces has released the following list of priests, deemed to have been credibly accused of sexual abuse of a minor.

The Archdiocese of Santa Fe announced it reached a $121.5 million settlement with clergy sexual abuse survivors. Click the headline to read more…

The Santa Fe Archdiocese is selling a number of assets in order to finalize its bankruptcy reorganization and pay survivors of clergy sex abuse. Click the headline to read more…

Former residents allege they were sexually abused during their time at St. Anthony’s Home for Boys in Albuquerque, NM. Click the headline to read more…

The Servants Paraclete, who operated a facility in Jemez Spring, New Mexico facility, which many say laundered pedophile priests, has asked a court to dismiss the charges. Click the headline to read more…