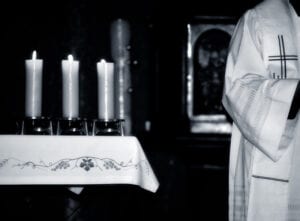 The Servants of Paraclete has asked a New Mexico court to dismiss a lawsuit involving David Holley and child molestation. The response states “the complaint fails to state claims, in whole or in part, upon which relieve can be granted as a matter of law”. While the merits of this particular dismissal request will play out in the court, there was a history of pedophile priests plaguing this particular facility.

The Congregation of the Servants of Paraclete was founded in 1947 by Father Gerald Fitzgerald. It’s first location was on 2000 acres in Jemez Springs, New Mexico. This particular facility closed in the 1990’s, but the Servants of the Paraclete still operate near St. Louis, Missouri.

The Jemez Springs institution was opened to help wayward priest seeks rehabilitation. The facility did eventually include priests who had issues with ‘sexual sins’ including those with minors.

Many people today assert that the New Mexico institution was a location for shuffling pedophile priests. The Pennsylvania grand jury report noted as much, saying “Put plainly, these institutions laundered accused priests, provided plausible deniability to the bishops, and permitted hundreds of known offenders to return.” Based on the six dioceses in the Pennsylvania Grand Jury report, at least 12 priests were sent to the Jemez Springs facility over the years.

In a 2019 AP article, it was noted that the Jemez Springs treatment facility was named as a defendant in a lawsuit claiming the facility allowed known pedophile priests to reenter priestly duties and sexually abuse children. Even the founder, Father Gerald Fitzgerald, had concerns about priests who had sexual issues reentering priestly duties. In a 1957 letter to Rev. Matthew Brady (Manchester, New Hampshire), Fitzgerald agreed to “receive the unfortunate padre as a permanent guest” but also noted;

“From our long experience with characters of this type, and without passing judgement on the individual, most of these men would be clinically classified as schizophrenic. Their repentance and amendment is superficial and, if not formally at least sub-consciously, is motivated by a desire to be again in a position where they can continue their wonted activity. A new diocese means only green pastures.”

Fr. David Holley was a patient at Servants of Paraclete in the early 1970’s before he was sent to a church in Alamogordo.

If you or a loved one were a victim of sexual abuse within a New Mexico Dioceses, contact our firm today. Our law firm handles New Mexico sexual abuse lawsuits and can help you understand how long you have to file a clergy abuse claim in the state of New Mexico. Call us now at 1-800-941-7209 for a FREE and PRIVATE consultation.