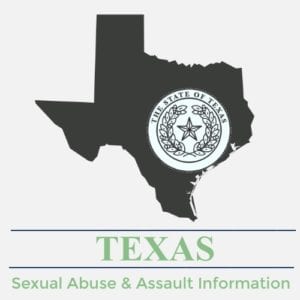 Texas has made some progress on both its criminal and civil statute of limitation (SOL) laws since 2002. Its efforts to change legislation has helped survivors of sexual abuse get justice against their abusers in the courts and allows for compensation. These laws enable lawyers handling sexual abuse claims in Texas to file cases against sexual predators, including clergy members, and the Catholic church.

Below you will find Texas lawsuits news & updates, as well as additional information on Texas’s statute of limitations laws. These laws are important because they dictate how long a lawyer handling Texas sexual assault cases has to file a claim on behalf of a survivor. In addition, we’ve compiled a list of Texas settlements received by sexual abuse and assault survivors and a list of Texas’s ‘credibly’ accused priests released by Texas Dioceses.

Texas has made progress towards helping survivors of sexual abuse get justice by changing some of its statute of limitations (SOL) laws for child sexual abuse for both criminal and civil claims. While the changes the state has made are a step in the right direction, a greater effort needs to be made to get more of the existing SOLs eliminated as well as opening up a revival window for claims that are currently time-barred.

Texas eliminated the criminal SOL for felony sex crimes. However, there is a two-year SOL for misdemeanors. Child USA, who has evaluated every state based on their criminal statute of limitation laws, gave Texas a Criminal SOL score of 3, on a 1-5 scale, where 5 is the highest. A score of 3 is defined as a criminal SOL eliminated for felonies only.

In 2019, Texas extended its civil SOL to age 48. While this age cap has been increased over time, Texas has not passed a revival window or other legislation regarding reviving time barred claims since 2002. However, in 2021, legislation was introduced which would open a permanent revival window for all expired claims. If this bill becomes law, likely thousands of survivors of child sexual abuse in Texas, who’s claims are currently time-barred, would now be able to file claims against their abusers and the institutions responsible for covering it up.

Child USA, who has also evaluated every state based on their civil statute of limitation laws, gave Texas a current Civil SOL Age Cap score of 3, on a 1-5 scale, where 5 is the highest. A score of 3 is defined as a civil SOL age cap between 35 and 49 years old for survivors.

If you or someone you love was sexually abused or assaulted in Texas, contact us now. Due to Texas’ improved statute of limitations laws, those sexually abused as a minor likely still have a claim against their abuser, no matter how long ago the abuse occurred. Even if the abuser is deceased, you may still have a claim against the organization responsible.

March 1998 – The Dallas Catholic Diocese agreed to a $7.5 million settlement with three young men who say they were sexually abused as boys by suspended priest Rudolph “Rudy” Kos. The diocese paid $3.1 million of the total settlement and two insurance companies split the balance. The victims first filed their suits five years prior to the settlement.

July 1998 – The Diocese of Dallas agreed to pay $23.4 million to nine former altar boys who said they were molested by priest Rudolph “Rudy” Kos. The bishop at the time of the settlement, Bishop Charles V. Grahmann, apologized for Kos’ behavior and for the way the diocese handled the allegations of abuse. One of the victims said that the apology will go a long way towards helping him get on with his life.

April 2005 – The Fort Worth Roman Catholic Diocese agreed to a $2.75 million settlement with a man who claimed he was sexually abused by the Rev. Thomas Teczar. The settlement followed a $1.4 million settlement with another Texas man. Both men claimed Teczar groped and raped them in the early 1990s. One of the victims was 12-years-old when the abuse started. Teczar had previously denied abusing anyone.

December 2007 – The Diocese of Fort Worth reached a confidential settlement with several people who claimed they were abused by Rev. Thomas Teczar. Teczar was convicted of sexual assault and indecency with a minor and sentenced to a 25-year prison term in March 2007.

December 2013 – The Diocese of Beaumont reached a confidential settlement with six men who claimed they were molested by Rev. Ronald Bollich when they were boys. The abuse of the boys took place at different times over twenty years. The victims were between the ages of 14 and 15 when they were subjected to Bollich’s fondling, groping and rape. The last of the victims was abused in 1992 and suffered permanent mental damage as a result.

July 2011 – The Diocese of Corpus Christi reached a $1.2 million settlement with three men who claimed they were sexually abused when they were altar boys in the 1970s by Monsignor Hugh Clarke. Clarke died in 2002.

September 2019 – The Austin Catholic Diocese reached a confidential settlement with six women who claimed that Rev. Isidore Ndagizimana, known as Father Izzy, would regularly prey on and abuse them. Ndagizimana was removed from ministry when the lawsuit was filed.

The settlements listed above are offered for educational purposes only and do not guarantee any future outcome or settlement. Each legal situation is different, and past performance does not guarantee future results. We do not maintain that is a full list of all settlements in the state of Texas but merely a grouping of those we choose to share on our website. Please contact us if you would like additional settlements

Catholic Dioceses in Texas have released the names of priests and clergy members who they deemed to be ‘credibly accused’ of sexual abuse of a child.
The lists below will be updated as litigation or investigations are concluded so that new names of credibly accused priests in Texas can be added.

Father Manuel La Rosa-Lopez was sentenced for child sex abuse while serving as a priest at Sacred Heart Catholic Church in Conroe, TX. Click the headline to read more…

The Village Church in Texas is facing a $1 million lawsuit for alleged sexual abuse which the victim stated occurred at a summer camp when she was 11 years old. Click the headline to read more…