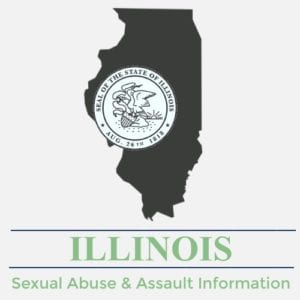 Illinois is noted for being one of the most victim friendly states in the country with regards to sexual abuse and assault laws. Its efforts to change legislation have helped survivors of sexual abuse get justice against their abusers in the courts, and also allows for compensation. These laws enable lawyers handling sexual abuse claims in Illinois to file cases against sexual predators, including clergy members, and the Catholic church.

Below you will find information on Illinois’s statute of limitations laws. These laws are important because they dictate how long a lawyer handling an Illinois sexual assault case has to file a claim on behalf of a survivor. In addition, we’ve compiled a list of Illinois’s settlements and jury awards received by sexual abuse and assault survivors and a list of Illinois’s ‘credibly’ accused priests released by the dioceses.

In 2017, Illinois eliminated the SOL for all felony and misdemeanor child sexual abuse offenses. It also set the SOL for sex trafficking survivors to age 43 and set the SOL for child pornography and prostitution to age 19 or 3 years from the offense, whichever is later. Child USA, who has evaluated every state based on their criminal statute of limitation laws, gave Illinois a Criminal SOL score of 5, on a 1-5 scale, where 5 is the highest. A score of 5 is defined as a criminal SOL eliminated for all felonies and misdemeanors. Illinois is one of only seven states to be given a perfect Criminal SOL score.

In 2014, after over 10 years of passing progressive legislation for child sexual abuse survivors, Illinois completely eliminated the civil SOL for child sexual abuse claims. Child USA, who has also evaluated every state based on their civil statute of limitation laws, gave Illinois a Civil SOL Age Cap score of 5, on a 1-5 scale, where 5 is the highest. A score of 5 is defined as an eliminated SOL age cap for survivors. Illinois is one of only ten states to be given a perfect Civil SOL Age Cap score.

If you or someone you love was sexually abused or assaulted in Illinois, contact us now. Due to Illinois’s elimination of civil statute dates for childhood sexual abuse, those sexually abused as a minor likely still have a claim against their abuser, no matter how long ago the abuse occurred. Even if the abuser is deceased, you may still have a claim against the organization responsible. Don’t wait; call us now.

Roman Catholic Dioceses in the state of Illinois have agreed to pay out an estimated $230 million to victims of child sex abuse. This is one of the largest totals paid out by any state’s Dioceses in the United States. In fact, in 2019 officials from the Archdiocese of Chicago estimated that it may need to pay out more than $150 million in additional settlements from sexual abuse claims in the future.

July 2003 – The Archdiocese of Chicago agreed to pay a Chicago area sexual abuse survivor $1.9 million to settle a claim that alleged a priest molested him between 1984 and 1988. The survivor, a 31-year-old man, claimed Rev. Vincent McCaffrey repeatedly sexually abused him at a local church. McCaffrey was convicted on child pornography charges in 2002 and was accused of molesting 50 victims between 1976 and 1991.

July 2003 – The Archdiocese of Chicago settled lawsuits with four sexual abuse survivors for nearly $4 million. The four men claimed Rev. Vincent McCaffrey repeatedly sexually molested them for more than a decade starting in the late 1970s. One of the survivors who came forward publicly, said that McCaffrey sexually abused him at least 25 times between 1984 and 1985 at St. Joseph the Worker parish in Wheeling, IL while he was an altar boy.

October 2003 – The Archdiocese of Chicago agreed to pay more than $8 million to settle claims from 15 sexual abuse survivors in the Chicago area. 10 men and 5 women claimed they were abused by 11 priests from 1954 to 1991. One of the claims referenced Rev. Marion Joseph Snieg as sexually abusing a 14-year-old boy in 1959 at then named St. Jane de Chantal parish in southwest Chicago. As part of the settlement, Cardinal Francis George, Catholic Archbishop of Chicago at the time, agreed to meet with the survivors.

May 2007 – The Diocese of Rockford settled a sexual abuse lawsuit for $2.2 million. The claim involved two teenage girls from Geneva and Aurora who were allegedly sexually abused by former priest Rev. Mark Campobello from 1999 to 2000 at St. Peter in Geneva and Aurora Central Catholic High School.

May 2007 – The Archdiocese of Chicago settled lawsuits with 15 sexual abuse survivors for nearly $7 million. One survivor of the claims received $2.3 million. These lawsuits were a result of sexual abuse committed by 12 different priests between 1962 and 1989. Rev. Vincent McCaffrey was named specifically in one of the lawsuits after being credibly accused of molesting a 33-year-old man when he was a child. The sexual abuse took place in the boy’s home and at St. Joseph the Worker School in Wheeling Illinois.

September 2007 – The Archdiocese of Chicago settled a sexual abuse claim with a 15-year-old boy and his family for nearly $2 million. At the time, this was the first settlement resulting from the widespread sexual abuse committed by Rev. Daniel J. McCormack in the church community. According to details of the claim, McCormack engaged in “continuous forced sexual abuse” of the boy from 2002 to 2005 at Our Lady of the Westside School in Arlington Heights, Illinois.

August 2008 – The Archdiocese of Chicago settled lawsuits with 16 sexual abuse survivors for nearly $13 million. 14 of the cases were associated with sexual abuse by 10 different priests between 1962 and 1994. Two specific cases were associated with Rev. Daniel J. McCormack who pled guilty and was convicted in 2007 of sexually abusing five children.

August 2008 – St. Clair County jury in Belleville awarded a sexual abuse survivor $5 million after he was abused as a child. The verdict originated from a claim that James Wisniewski, the survivor, was sexually abused by Rev. Raymond Kownacki when he was an altar boy at St. Theresa’s Parish in Salem, Illinois from 1973 to 1978. All the while, the Belleville Diocese knew about the sexual abuse and covered it up for decades. The father of James Wisniewski, Mel Wisniewski, said in response to the verdict, “I feel that our family can begin to heal now, especially my son Jim, but I think most of all we feel that maybe a whole lot of people out there who were afraid to come out before might have the courage now to come out and look at the problems, and admit the problems and start their healing, too.”

September 2008 – The Archdiocese of Chicago agreed to pay $2.5 million to a boy sexually abused by Rev. Daniel J. McCormack from 2004 to 2005. The survivor was a member of the basketball team McCormack coached at nearby Our Lady of the Westside School in Arlington Heights, Illinois. Unfortunately, the sexual abuse continued after initial allegations against McCormack surfaced and the Archdiocese of Chicago had assigned a monitor to supervise the pries

July 2009 – The Archdiocese of Chicago settled lawsuits with six sexual abuse survivors for nearly $4 million. While that was a lot of money for the survivors, attorneys for the victims said the ultimate benefit was the effort toward transparency of sexual abuse within the archdiocese.

October 2009 – The Diocese of Belleville agreed to pay $1.2 million to settle a lawsuit filed by a former altar boy. The boy claimed that Rev. Raymond Kownacki of Dupo molested him in the late 1970s at St. Theresa’s Parish in Salem, Illinois.

May 2015 – The Archdiocese of Chicago agreed to pay $1.25 million to settle a lawsuit filed by a sexual abuse survivor. The survivor, now in his 20s, claimed that Rev. Daniel J. McCormack sexually abused him when he was a 4th and 5th grader at St. Ailbe Catholic School on the South Side of Chicago.

August 2018 – The Diocese of Joliet agreed to pay $1.4 million to settle a lawsuit filed by three sexual abuse survivors. The survivors claimed that they were molested as boys when they were under 11 years old by Rev. Leonardo G. Mateo from 1980 to 1982. According to the Joliet Diocese at the time, credible allegations of sexual abuse of minors had been made against 35 diocesan priests from 1986 to 2018.

November 2019 – The Diocese of Joliet agreed to pay over $2 million to settle a lawsuit filed by a sexual abuse survivor in his 50s. The survivor claimed that he was sexually abused when he was 11 years old by Rev. Henry Slade at St. Pius X Catholic Church in Lombard during the summer of 1976. During the sexual assault, allegedly another priest Rev. Philip Dedera heard what was happening on the other side of a closed door and chose to do nothing. Following the sexual assault, Dedera allegedly led the boy to his room, gave him marijuana to smoke and told him, “this will help you to forget what happened”, said the survivor’s attorney at the time.

April 2020 – The Archdiocese of Chicago agreed to pay $2.1 million to settle a lawsuit filed by a 12-year-old girl and her family. The settlement stems from allegations that the survivor, who was 7 years old at the time, was repeatedly sexually abused by a counselor at a Catholic Church camp in 2015. To cover up the sexual abuse, when the girl’s father confronted the priest and church leaders, their response was to discourage the family from reporting the crime to the police.

*The settlements listed above are offered for educational purposes only and do not guarantee any future outcome or settlement. Each legal situation is different, and past performance does not guarantee future results. We do not maintain that is a full list of all settlements in the state of Illinois but merely a grouping of those we choose to share on our website. Please contact us if you would like additional settlements included or if you notice any inaccuracies on our site. We strive to provide our viewers the most up to date and accurate information as possible.

Catholic Dioceses in Illinois have released the names of priests and clergy members who they deemed to be ‘credibly accused’ of sexual abuse of a child.

The lists below will be updated as litigation or investigations are concluded so that new names of credibly accused priests in Illinois can be added.

Is it Too Late to File a Clergy Abuse Lawsuit in Illinois?

The Archdiocese of Chicago agreed to settle a lawsuit stemming from allegation of child sexual abuse surrounding former clergy member, Rev. John Calicott. Claims against Calicott were first reported as early as the 1970s. Click the headline to read more…