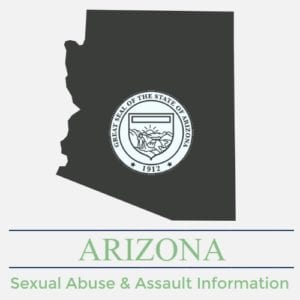 In 2019, Arizona made several changes to its civil statute of limitations laws regarding child sexual abuse, including a new law specific to child sex abuse. These changes should help survivors of sexual abuse and assault get justice against their abuser, while also allowing for compensation. Statute of limitations laws enable lawyers handling sexual abuse claims in Arizona to file cases against sexual predators, including clergy members, and the Catholic church.

Below you will find Arizona lawsuits news & updates, as well as additional information on Arizona’s statute of limitations laws. These laws are important because they dictate how long a lawyer handling an Arizona sexual assault case has to file a claim on behalf of a survivor. In addition, we’ve compiled a list of Arizona settlements received by sexual abuse and assault survivors and a list of Arizona’s ‘credibly’ accused priests released by the dioceses.

Arizona was one of 29 states to pass SOL reform legislation in 2019 and 2020. A highlight of their SOL reform was extending the state’s SOL age cap to age 30 in order to help sexual abuse survivors. The state also eliminated the SOL for child sex trafficking criminal claims.

In 2020, Arizona eliminated the SOL for child sex trafficking. Additionally, the state has no SOL for survivors of sexual abuse who were victims under the age of 15 or under the age of 18 if the abuser was a parent, guardian, teacher or priest. Child USA, who has evaluated every state based on their criminal statute of limitation laws, gave Arizona a Criminal SOL score of 3, on a 1-5 scale, where 5 is the highest. A score of 3 is defined as a criminal SOL eliminated for felonies only.

Arizona’s current civil age cap for victims of child sexual abuse is age 30. There is also no SOL for sex trafficking with liability for perpetrators, other individuals and entities that benefited from participating in a trafficking venture. Arizona does have a discovery rule which is only applicable in cases involving repressed memories of child sex abuse. However, due to the state’s recent changes to its child sex abuse SOL, it is unclear if the discovery rule will still be applicable to future claims. Child USA, who has also evaluated every state based on their civil statute of limitation laws, gave Arizona a Civil SOL Age Cap score of 5, on a 1-5 scale, where 5 is the highest. A score of 5 is defined as no civil SOL age cap or elimination of the SOL.

If you or someone you love was sexually abused or assaulted in Arizona, contact us now. Due to Arizona’s improved statute of limitations laws, those sexually abused as a minor may still have a claim against their abuser, depending upon how long ago the abuse occurred. Even if the abuser is deceased, you may still have a claim against the organization responsible.

It is estimated that the Roman Catholic Diocese of Phoenix and Tucson have combined to pay out nearly $40,000,000 to survivors of sexual abuse at the hands of its clergy and other church personnel. Below outlines the timeline of those settlements.

1994 – The Catholic Diocese of Phoenix settled out of court with a Scottsdale couple whose son was molested by a priest, Rev. George Bredemann, for an undisclosed amount. The diocese is said to have settled an earlier claim in 1991 against the same priest.

February 2002 – The Tucson Diocese reached a confidential settlement, estimated to be worth at least $15,000,000, for claims involving four priests who sexually abused children from 1966 to 1989 in parishes in Tucson and Yuma. While the majority of the documents surrounding this settlement were sealed, one document, a deposition taken of the bishop of the Tucson Diocese, Rev. Manual Moreno, was released. The deposition describes a ‘secret code of the collar’ which states that church officials failed to act on information related to sexual abuse within its dioceses. Two of the priests named in this settlement, Revs. Pedro Luke and William Byrne, have died. The two others, Monsignor Robert Trupia and the Rev. Michael Teta, were suspended from duty at the time but still received a salary and health benefits paid by the church. Both were later laicized in 2004.

August 2003 – The Diocese of Tucson agreed to pay $1,800,000 to five girls sexually abused while they were students at St. Francis of Assisi Catholic School in Yuma from 1999-2000 by their teacher, Phillip Gregory Spears. Spears was convicted of having child pornography in 2002 and was put on trial in 2003 for the child molestation charges related to this settlement and found guilty. Both the 2002 and 2003 convictions were overturned on appeal. In 2007 the molestation charges were refiled. Spears was found guilty and sentenced to 34 years in prison.

September 2005 – It is estimated that over 50 victims received $22,200,000 as part of the trust set up for survivors in the Tucson Diocese’s bankruptcy reorganization. The claims go back as far as the 1950s with some claims as recent as 2002. While not all names of the priests accused and part of this settlement were released, the following were included:

In addition, the Diocese released a list in December of 2004 naming the clergy and other church personnel to ‘whom the diocese is aware of credible allegations of sexual misconduct involving a minor.’

*The settlements listed above are offered for educational purposes only and do not guarantee any future outcome or settlement. Each legal situation is different, and past performance does not guarantee future results. We do not maintain that is a full list of all settlements in the state of Arizona but merely a grouping of those we choose to share on our website. Please contact us if you would like additional settlements included or if you notice any inaccuracies on our site. We strive to provide our viewers the most up to date and accurate information as possible.

Catholic Dioceses in Arizona have released the names of priests and clergy members who they deemed to be ‘credibly accused’ of sexual abuse of a child.

The lists below will be updated as litigation or investigations are concluded so that new names of credibly accused priests in Arizona can be added.

A federal lawsuit alleges the Tucson and Los Angeles Dioceses violated racketeering laws by concealing sexual abuse activity by clergy and suppressing information about it. Click the headline to read more…

The window for filing a claim of childhood sexual abuse in Arizona has been extended to December 31, 2020. Click the headline to read more…

Over 100 Names of Accused Clergy Released by the Phoenix Diocese

The Diocese of Phoenix released over 100 names of clergy that were accused of sexual abuse. Click the headline to read more…