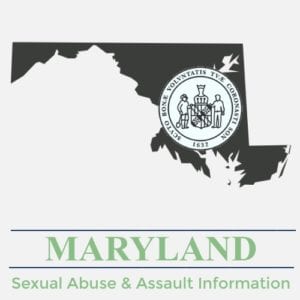 Maryland has made efforts to improve the state’s statute of limitation laws and extend the time allowed for victims to receive civil compensation. However, none of the proposed bills regarding the statute of limitations for sexual abuse claims has been enacted into law, and there are no bills in the state’s Legislature at this time. These laws enable lawyers handling sexual abuse claims in Maryland to file cases against sexual predators, including clergy members, and the Catholic church.

Below you will find Maryland lawsuits news & updates, as well as additional information on Maryland’s statute of limitations laws. These laws are important because they dictate how long a lawyer handling Maryland sexual assault cases has to file a claim on behalf of a survivor. In addition, we’ve compiled a list of Maryland’s settlements received by sexual abuse and assault survivors and a list of Maryland’s ‘credibly’ accused priests released by the Baltimore Archdiocese.

Maryland has already eliminated the criminal SOL for felony and misdemeanor sex crimes. While the state has made efforts to extend the civil SOL and even open a revival window, none of those efforts has been successful and the state remains in the middle of the pack as far as helping victims of childhood sexual abuse civilly.

Since 2002, Maryland has had no criminal SOL for felony sex crimes. Child USA, who has evaluated every state based on their criminal statute of limitation laws, gave Maryland a Criminal SOL score of 5, on a 1-5 scale, where 5 is the highest. A score of 5 is defined as a criminal SOL eliminated for all felonies and misdemeanors.

In 2017, Maryland extended its civil SOL to age 38 or 3 years after the defendant is convicted of a crime related to the victim’s abuse. While a bill to eliminate the civil SOL and open a revival window has been passed in the house of Maryland’s legislature, unfortunately it was never passed as a law.

Child USA, who has also evaluated every state based on their civil statute of limitation laws, gave Maryland a Civil SOL Age Cap score of 3, on a 1-5 scale, where 5 is the highest. A score of 3 is defined as a civil SOL age cap between 35 and 49 years old for survivors.

November 2016 – The Archdiocese of Baltimore reached settlements with several people who claimed they were abused by Rev. A. Joseph Maskell at Archbishop Keough High School decades ago. Maskell died in 2001 and had a large number of sexual abuse accusations against him. Settlement amounts were not released to the public.

January 2017 – The Archdiocese of Baltimore reached a $50,000 settlement with a woman who claimed she was sexually abused years ago when she was a student at Archbishop Keough High School. The victim, Jean Hargadon Wehner, also named Rev. A. Joseph Maskell as her abuser.

The settlements listed above are offered for educational purposes only and do not guarantee any future outcome or settlement. Each legal situation is different, and past performance does not guarantee future results. We do not maintain that is a full list of all settlements in the state of Maryland but merely a grouping of those we choose to share on our website. Please contact us if you would like additional settlements included or if you notice any inaccuracies on our site. We strive to provide our viewers the most up to date and accurate information as possible.

The Archdiocese of Baltimore first released a list of priests in the diocese who were credibly accused of child sexual abuse in 2002. Over the years, the diocese has added more names to the list. The list below was last updated by the Archdiocese in 2019. The list will be updated as litigation or investigations are concluded so that new names of credibly accused priests in Maryland can be added.

A former Concordia Preparatory School student alleged she was sexually assaulted several times by other students, while administrators, made aware of the incidents, stood idly by. Click the headline to read more…