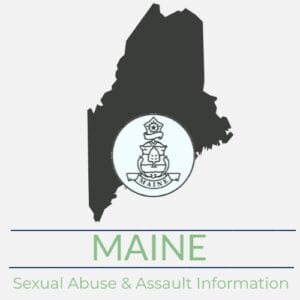 Maine’s current criminal and civil statute of limitations (SOL) laws are some of the friendliest in the country to survivors of childhood sexual abuse. For most felonies, the criminal SOL has been eliminated and there is no civil SOL for childhood sexual abuse. In addition, in October of 2021, a new law opened a permanent revival window allowing survivors of sexual abuse, whose claims were previously time-barred by old statute of limitations laws, to file their claims in court against perpetrators and other institutions who may be responsible for covering up the abuse. Civil SOL laws enable lawyers handling sexual abuse claims in Maine to file cases against sexual predators, including clergy members, and the Catholic Church.

Below you will find Maine lawsuits news & updates, as well as additional information on Maine’s statute of limitations laws. These laws are important because they dictate how long a lawyer handling Maine sexual assault cases has to file a claim on behalf of a survivor. In addition, we’ve compiled a list of Maine settlements received by sexual abuse and assault survivors and a list of Maine’s ‘credibly’ accused priests released by Maine’s Dioceses.

Maine’s civil and criminal statute of limitations (SOL) laws are very victim friendly. Currently, there is no civil SOL for survivors of childhood sexual abuse and a permanent revival window opened on October 18, 2021.

In Maine, there is no criminal SOL for the following felonies when the victim is under 16 years of age: incest, unlawful sexual contact, sexual abuse of a minor, rape, and gross sexual assault. The criminal SOL for unlawful sexual contact and gross sexual assault when the victim is 16 years of age or older is 20 years from the offense. Child USA, who has evaluated every state based on its criminal statute of limitations laws, gave Maine a Criminal SOL score of 4, on a 1-5 scale, where 5 is the highest. A score of 4 is defined as an elimination of the criminal SOL for some felonies and misdemeanors.

In Maine, there is no civil SOL for child sex abuse claims. Child USA, who has also evaluated every state based on its civil statute of limitation laws, gave Maine a Civil SOL Age Cap score of 5, on a 1-5 scale, where 5 is the highest. A score of 5 is defined as no civil SOL age cap or eliminated SOL.

In addition, Child USA gave Maine a related SOL Revival Law score of 5 on the same 1-5 scale. A score of 5 is defined as a permanently open revival window for all claims against perpetrators, individuals, private organizations, and government. Maine now joins Vermont as the second state in the county to receive perfect civil SOL scores from Child USA.

December 2009 – The Diocese of Portland reached a $200,000 settlement with a woman who claimed she was sexually abused by Rev. James Vallely when she was 11 years old and an altar server at St. Michael’s parish in South Berwick. The abuse occurred in 1976. Vallely died in 1997.

August 2016 – The Diocese of Portland reached a settlement with six men who claim they were abused by Rev. James Vallely when they were boys. The abuse occurred between the 1950s and 1970s. The total amount of the settlement was $1.2 million. The men did not want to detail how the settlement was going to be divided amongst them.

The settlements listed above are offered for educational purposes only and do not guarantee any future outcome or settlement. Each legal situation is different, and past performance does not guarantee future results. We do not maintain that is a full list of all settlements in the state of Maine but merely a grouping of those we choose to share on our website. Please contact us if you would like additional settlements included or if you notice any inaccuracies on our site. We strive to provide our viewers the most up to date and accurate information as possible.

As of June 2021, The Catholic Dioceses of Portland Maine has yet to release any official list of names of priests and clergy members who they deemed to be ‘credibly accused’ of sexual abuse of a child.

The first lawsuits were filed against the Diocese of Portland since Maine eliminated the statute of limitations laws for child sexual abuse. Click the headline to read more…

Guilty verdict against Ronald Paquin, a defrocked priest, who sexually abused two minors on a trip to Kennebunkport, Maine, was upheld by Maine’s top court. Click the headline to read more…