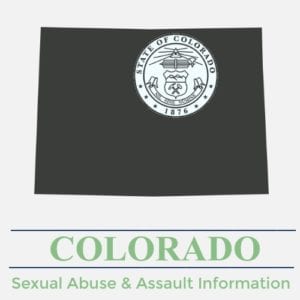 Colorado recently passed new legislation that will give many survivors of child sexual abuse the opportunity to pursue civil justice against their abusers. The new laws eliminate the statute of limitations for survivors whose claims have not expired and opens a three-year revival window for survivors whose abuse occurred on or after January 1, 1960.

Below you will find Colorado lawsuits news & updates, as well as additional information on Colorado’s statute of limitations laws. These laws are important because they dictate how long a lawyer handling a Colorado sexual assault case has to file a claim on behalf of a survivor. In addition, we have compiled a list of Colorado settlements received by sexual abuse and assault survivors and a list of Colorado’s ‘credibly’ accused priests.

By 2006, Colorado was leading the way in changes to its criminal statute of limitations (SOL) laws. It eliminated all criminal SOLs for child sex abuse, making it one of the few states at that time to do so. In 2021, the governor signed new laws which would eliminate the civil SOL for some survivors and open a three-year revival window for others.

In 2006, Colorado eliminated the SOLs for all felony sex offenses against children. And in 2019, the state added unlawful electronic sexual communication to its list of felony sex offenses against children for which there is no SOL. Child USA, who has evaluated every state based on their criminal statute of limitation laws, gave Colorado a Criminal SOL score of 3, on a 1-5 scale, where 5 is the highest. A score of 3 is defined as a criminal SOL eliminated for felonies only.

Colorado’s new civil SOL laws for child sexual abuse eliminate the SOL for victims whose claims have not yet expired under the state’s previous law. The new law also opens a three-year revival window for survivors who suffered sexual abuse as a child on or after January 1, 1960. The revival window opened on January 1, 2022 and closes on December 31, 2024. Child USA, who has also evaluated every state based on their civil statute of limitation laws, gave Colorado a Civil SOL Age Cap score of 5, on a 1-5 scale, where 5 is the highest. A score of 5 is defined as no civil SOL age cap and eliminated SOL.

Additionally, Child USA gave Colorado a related SOL Revival Law score of 3 on the same 1-5 scale. A score of 3 is defined as a revival window or revival up to age 30-54, for claims against perpetrators and others (not explicitly against all individuals, private organizations, and government).

If you or someone you love was sexually abused or assaulted in Colorado, contact us now. Based on Colorado’s new laws, those sexually abused as a minor may still have a claim against their abuser, depending upon when the abuse occurred. Even if the abuser is deceased, you may still have a claim against the organization responsible. Colorado’s revival window closes on December 31, 2024.

Over $10 million has been paid out in settlements to victims of priest molestation in Colorado since 2007. Below outlines some of the notable settlements made by the Archdiocese of Denver and the Pueblo Diocese.

July 2008 – The Archdiocese of Denver, lead by Archbishop Charles J. Chaput, settled 18 separate claims for $5,500,000. With one exception, Chaput stated that all of the claims of sexual abuse were limited to 2 deceased priests, Rev. Harold Robert White and Rev. Leonard Abercrombie.

October 2008 – The Pueblo Diocese reached a settlement with 23 former Roncalli High School students for $4,200,000. The claims accused Marianist Brother William Mueller of sedating the students by using ether and then sexually molesting them.

December 2020 – $7.3 million in settlements were paid out by the Catholic Church to over 70 victims of sexual abuse within Colorado parishes following a 22 month investigation by Colorado’s Attorney General.

*The settlements listed above are offered for educational purposes only and do not guarantee any future outcome or settlement. Each legal situation is different, and past performance does not guarantee future results. We do not maintain that is a full list of all settlements in the state of Colorado but merely a grouping of those we choose to share on our website. Please contact us if you would like additional settlements included or if you notice any inaccuracies on our site. We strive to provide our viewers the most up to date and accurate information as possible.

In 2019, Colorado’s Attorney General released a list containing the names of clergy members they found to be ‘credibly accused’ of sexual abuse of a child. That list was later updated on December 1, 2020.

The lists below will continue to be updated as litigation or investigations are concluded so that new names of credibly accused priests in Colorado can be added.

87 victims have filed claims through Colorado’s Independent Compensation Program (ICP) for clergy sexual abuse within the Archdiocese of Denver, Diocese of Colorado Springs or Diocese of Pueblo. Click the headline to read more…