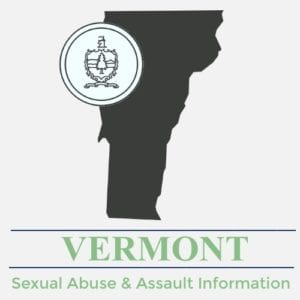 Vermont has made great strides to change legislation in order to help survivors of sexual abuse and assault get justice against their abuser, while also allowing for compensation. These laws enable lawyers handling sexual abuse claims in Vermont to file cases against sexual predators, including clergy members, and the Catholic church.

Below you will find Vermont lawsuits news & updates, as well as additional information on Vermont’s statute of limitations laws. These laws are important because they dictate how long a lawyer handling a Vermont sexual assault cases has to file a claim on behalf of a survivor. In addition, we’ve compiled a list of Vermont settlements and jury awards received by sexual abuse and assault survivors and a list of Vermont’s ‘credibly’ accused priests released by the dioceses.

Vermont led the way for change in 2019 by making significant changes to both criminal and civil statute of limitation laws (SOLs) centered around helping survivors of sexual abuse and assault. In fact, it is recognized as one of the most victim-friendly states in the country.

Vermont has eliminated all criminal SOLs associated with sexual abuse of a minor, including sexual assault of a child, trafficking, and sexual exploitation of a minor. For adult sexual assault, meaning someone who is 18 years or older, Vermont law allows the prosecution of the assailant up to 3 years after the offense occurred. Child USA, who has evaluated every state based on their criminal statute of limitation laws, gave Vermont a Criminal SOL score of 3, on a 1-5 scale, where 5 is the highest. A score of 3 is defined as a criminal SOL eliminated for felonies only.

Effective on July 1, 2019, Vermont’s new laws not only eliminated the civil SOL for survivors of child sexual abuse, but also revived all claims that were previously expired without limitation. The bill first passed Vermont’s House in March 2019, then unanimously passed in the Senate in May 2019.

Child USA, who has also evaluated every state based on their civil statute of limitation laws, gave Vermont a Civil SOL Age Cap score of 5, on a 1-5 scale, where 5 is the highest. A score of 5 is defined as an eliminated SOL age cap for survivors. Additionally, Child USA gave Vermont a related SOL Revival Law score of 5 on the same 1-5 scale. A score of 5 is defined as a permanently open revival window for all claims against perpetrators, individuals, private organizations and government. Vermont should be commended as it is the only state in the county to receive perfect civil SOL scores from Child USA.

If you or someone you love was sexually abused or assaulted in Vermont, contact us now. Due to Vermont’s improved statute of limitations laws, those sexually abused as a minor likely still have a claim against their abuser, no matter how long ago the abuse occurred. Even if the abuser is deceased, you may still have a claim against the organization responsible.

The Roman Catholic Diocese of Burlington has paid out over $20 million dollars to victims of priest molestation in Vermont since 2004. Below outlines the timeline of those settlements, trials and jury awards.

March 2004 – The Roman Catholic Diocese of Burlington agrees to pay $120,000 to a man who was abused by Rev. James McShane while attending a parochial school in St. Albans in 1970.

April 2004 – The Diocese of Burlington settled the case of a former school-boy who attended St. Ann Catholic Church in Milton, Vermont in the late 1970s. His claims stated that he was molested by Rev. Alfred Willis when he was just 13-years old. The case settled for $170,000.

June 2007 – A case against Rev. Alfred Willis was declared a mistrial by the judge due to questions the Church’s attorney posed to the plaintiff. The case was retried in December of the same year, but the jury found the lawsuit was time-barred and filed too late. In September of 2009 the Vermont Supreme Court reversed the SOL decision, which in affect affirmed the lower court’s order finding the Diocese of Burlington responsible, and ordered them to pay $112,000 to the victim to cover his legal costs.

May 2008 – A former altar boy was awarded more than $8 million in damages against the Roman Catholic Diocese of Burlington. The plaintiff, who was 40 years old and living in Colorado at the time of the trial, stated that he was abused from 1976 through 1978 by Rev. Edward Paquette while serving at the Christ the King Church in Burlington, Vermont. The jury award consisted of $950,000 in compensatory damages and $7,750,000 in punitive damages.

August 2008 – A mistrial was declared after a jury was unable to reach a verdict against Rev. Edward Paquette. A former altar boy alleged the abuse occurred over 20 times between 1977 and 1979.

October 2009 – A jury awarded $2.2 million to a former altar boy who was also molested by Rev. Edward Paquette in the 1970s. His claims included at least 20 instances of sexual abuse from 1976 to 1978 at the Christ the King Church in Burlington.

December 2008 – A second former altar boy was awarded nearly $3.6 million in damages after proving his allegations of sexual abuse against the same priest, Rev. Edward Paquette, as in an earlier trial the same year (see above). They jury verdict included $192,500 in compensatory damages and $3,400,000 in punitive damages.

May 2010 – The Roman Catholic Diocese of Burlington agreed to pay out $17.6 million to settle 26 lawsuits against priests in Vermont for child molestation. In addition, as part of the settlement the Diocese of Burlington also agreed to settle the cases of 3 former altar boys who won large jury awards at trial, but who’s cases were all being appealed by the diocese. (See above.) While the amounts of the individual settlements were undisclosed, it was confirmed that over $20 million was paid out to victims of priest molestation in Vermont in 2010.

*The settlements listed above are offered for educational purposes only and do not guarantee any future outcome or settlement. Each legal situation is different, and past performance does not guarantee future results. We do not maintain that is a full list of all settlements in the state of Vermont but merely a grouping of those we choose to share on our website. Please contact us if you would like additional settlements included or if you notice any inaccuracies on our site. We strive to provide our viewers the most up to date and accurate information as possible.

In October of 2018, the Archdiocese of Burlington released the names of priests and clergy members who they deemed to be ‘credibly accused’ of sexual abuse of a child.

The list below will be updated as litigation or investigations are concluded so that new names of credibly accused priests in Vermont can be added.

In August of 2019, Bishop Christopher Coyne released the list of 40 priests to public, after a committee found the allegations of sexual abuse credible. The committee reviewed over 50 personnel files and spent over 9 months reviewing the available documents. Click the headline to read more…