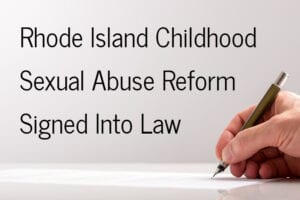 On August 9, 2019, Governor Gina M. Raimondo held a ceremony, signing into law a new childhood sexual abuse statute of limitations reform. The reform gives victims of childhood sexual abuse a major victory, which will allow more survivors, particularly those who are older, the ability to hold their abusers accountable for their actions.

The previous statute of limitations was 7 years from the time a childhood victim becomes an adult, only giving survivors until age 25 to file a claim. The new legislation pushes the statute to 35 years, giving survivors until age 53 to bring a suit against individuals and/or the organizations responsible. The additional time is vital since survivors often suppress these memories and do not talk about what happened to them until decades after the incident.

In addition to extending the statute of limitations, the new laws also give survivors a 7 year ‘discovery rule’, which allows lawsuits to be filed within 7 years of the survivor remembering the abuse, which often happens during therapy much later as an adult.

Unlike most states, however, Rhode Island’s ‘revival’ window is set up differently. Instead of providing a time window, Rhode Island’s law provides an age window. In both legislative approaches previously time-barred childhood sexual abuse cases can be brought in a civil court, however both have some limitations. In Rhode Island, a person older than 53, who does not qualify under the discovery rule, would likely have little recourse within the courts. (However, that is not to say that there are no available options for seeking compensation.) In New York, anyone, regardless of their current age, has the ability to bring a lawsuit through January 14, 2021. However, after that time, any person who doesn’t meet the new statute of limitation age limit, which is 55, would be prohibited from bringing a suit in court.

Given the number of recent headlines regarding sexual abuse emanating from state universities like Michigan State University and Pennsylvania State University, Rhode Island Senator Donna M. Nesselbush was happy that the reform also laid out provisions for holding accountable public and state municipalities. Senator Nesselbush wasn’t the only elected official in favor of the law. The State Senate voted 37-0 while the House Voted 70-1.

If you or a loved one were a victim of sexual abuse in Rhode Island, or any other state, contact our firm today. Our law firm handles Rhode Island sexual abuse lawsuits and can help you understand how long you have to file a clergy abuse claim in the state of Rhode Island. Call us now at 1-800-941-7209 for a FREE and PRIVATE consultation.