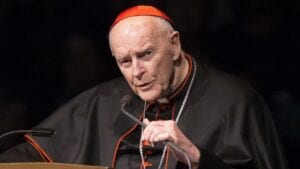 A lawsuit has been filed in New Jersey Superior Court against former Cardinal Theodore McCarrick for what’s being called a ‘sex ring’. The lawsuit is being brought by one of the survivors, who chose to remain anonymous, but is referenced as “Doe 14” in court documents. The complaint alleges Doe 14 was groomed to be part of a sex ring scheme that was headed up by then Bishop McCarrick. The complaint notes the scheme perpetuated over dozens of years and included multiple minors, some of which were seminarians, or those studying to become priests.

Based on the lawsuit, much of the alleged sexual abuse happened at a Sea Girt beach house on the Jersey Shore. In the complaint, it notes other priests served to help procure the boys who would stay at McCarrick’s beach house. Once at the house, McCarrick would assign sleeping arrangements, thereby handpicking his victims.

The lawsuit not only includes former Cardinal McCarrick, but also names the Diocese of Metuchen, the Archdiocese of Newark, and several schools Doe 14 had attended while growing up. Several clergy and priests were specifically named and include:

Knowing what we know now, it’s not hard to imagine that Cardinal McCarrick could have been responsible for heading up a ‘sex ring’. Once a very recognized leader in New Jersey’s Catholic Church, his sins were brought into the public light as survivors started stepping forward and the Vatican was put on notice. Prior to that, there were many settlements reached between the Archdiocese of Newark, the Diocese of Trenton and the Diocese of Metuchen and McCarrick’s other sex abuse victims from the Sea Girt beach house. However, the Dioceses insisted on confidentiality agreements as part of the settlement agreements, which prohibited those survivors from telling their stories.

The recent allegations, like that made by Geoffrey Downs, facilitated a very public display of McCarrick’s abuse of power and horrific actions against minors. In addition, after an investigation by the Vatican, McCarrick was found guilty of sexual crimes against adults and minors and abuse of power. The Vatican dismissed him from the clergy in February of 2019. No criminal charges have been filed against McCarrick to date and while the statute of limitations for crimes he committed against adults have expired, no such statute exists in New Jersey for the abuse against minors. That said, experts in the area believe that given his age and that the Pope sent him to live in seclusion in a religious residence in Victoria, Kansas to ‘contemplate a life of prayer and penance’, it is unlikely any charges will be filed.

If you or a loved one were a victim of sexual abuse at the hands of defrocked Cardinal McCarrick, or by any clergy member within a New Jersey Diocese, contact our firm today. Our law firm handles New Jersey sexual abuse lawsuits and can help you understand how long you have to file a clergy abuse claim in the state of New Jersey. Call us now at 1-800-941-7209 for a FREE and PRIVATE consultation.