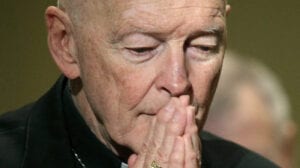 A former altar boy has filed a lawsuit against defrocked Cardinal Theodore McCarrick and the Diocese of Metuchen. Geoffrey Downs, who is represented by Derek Braslow and the Feeney Law Firm, is accusing McCarrick of sexually abusing him as a teenager prior to mass.

After 40 years of walking away from the Catholic Church, Geoffrey Downs bravely broke his silence to tell his story. Born and raised in a devout Catholic family, he attended St. Francis Cathedral School, and for high school went on to Bishop George Ahr. He also served as an altar boy at St. Francis of Assisi Catholic Church in Metuchen for much of his grade school and teenage years. It was during that time that McCarrick offered to help Downs with his grades and arrange some “alone time” at a beach house owned by the diocese located on the Jersey shore. Later, while helping McCarrick prepare for mass as an altar boy, McCarrick fondled him. After it happened, Downs fled the Catholic Church. Downs explained,

“I didn’t want anything to do with organized religion. I definitely did not tell my parents. Back then, that generation — the church was the most reverent thing. You couldn’t say anything about the church. I think I told another altar boy.”

McCarrick has been repeatedly accused of sexual abuse. Even while rising through the ranks of the Catholic Church, a number of allegations had been brought against him well before any lawsuits were actually filed. While serving as Archbishop for the Archdiocese of Newark, the Diocese admitted that he had been previously accused of sexual misconduct with at least three adults during his time there. Two of those cases were settled for undisclosed amounts.

After these settlements were made, in late 2000, McCarrick was made Cardinal. It wasn’t until the Archdiocese of New York received an abuse allegation from a former altar boy, that McCarrick was removed from public ministry, and later forced to resign from the College of Cardinals. The Vatican later conducted its own investigation which led to McCarrick being laicized. This form of punishment is considered to be the most severe that can be imposed by the Catholic Church.

In July 2020, another survivor came forward, filing a lawsuit claiming that he was cast in a “sex ring” aimed at bringing victims to McCarrick at his beach house on the Jersey shore which lasted at least 10 years. While Downs is clearly not alone in his accusation, he is one of the few survivors who has been willing to speak out. He explains, “I want the story told. I want the church and those monsters to atone for what they’ve done.”

If you or a loved one were a victim of sexual abuse at the hands of defrocked Cardinal McCarrick, or by any clergy member within a New Jersey diocese, contact our firm today. Our law firm handles New Jersey sexual abuse lawsuits and can help you understand how long you have to file a clergy abuse claim in the state of New Jersey. Call us now at 1-800-941-7209 for a FREE and PRIVATE consultation.