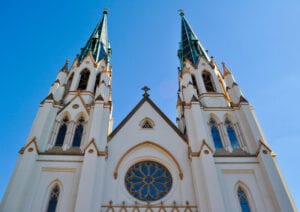 In a matter of seven days, the Catholic Diocese of Charleston found itself having to defend itself against two allegations of priest sexual abuse. The allegations of abuse span from 1961 through the mid-1970s.

One victim, a woman who has chosen to remain anonymous, referred to here as ‘Mary Roe 1818’, said priest Frederick Austin McLean repeatedly abused her and her sisters as children. The abuse occurred between 1961 and 1966 while he was a priest and teacher at St. John Catholic Church and School. McLean passed away in 2017.

McLean was transferred to the Charleston Diocese in 1959. His previous assignments included:

The second suit alleges priest Frederick Hopwood, who died in 2017, sexually abused a man who was 13 years old at the time. The abuse spanned two years in the mid-1970s and occurred while the victim was a student at St. John’s Catholic Church and Cathedral School. The frequency of the abuse eventually became weekly according to the victim.

Hopwood had a history of clergy abuse allegations dating back to the 1990s. In 1994, he pleaded guilty to committing a lewd act upon a minor. Part of the plea deal included immunity from other abuse cases by the solicitor’s office. Even with that deal, his name surfaced again in association with a $12 million settlement in 2007. Victims noted Hopwood as one of the predator priests thereby associating him with the class action lawsuit settlement. He served at St. Mary’s Catholic Church in Greenville.

Both McLean and Hopwood were named in the Diocese of Charleston Accused Priest list which was released in March of 2019.

In both cases, victims have named the Diocese of Charleston as a defendant for their role in covering up the abuse. ‘Mary Roe 1818’, claims the church was aware of McLean’s behavior and actively covered it up. The second victim notes the church knew or should have known the abuse was happening.

It’s no longer a secret that in many cases the Catholic Church tried to cover-up child sexual abuse committed by its priests. Similar suits alleging the church should have known, or covered up the sexual abuse, have been filed around the country including within the Diocese of Scranton (PA) and Diocese of Allentown (NJ).

If you or a loved one were a victim of sexual abuse within the Diocese of Charleston contact our firm today. Our law firm handles South Carolina priest sexual abuse lawsuits and can help you understand how long you have to file a clergy abuse claim in the state of South Carolina. Call us now at 1-800-941-7209 for a FREE and PRIVATE consultation.