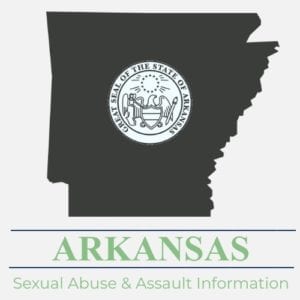 On April 30, 2021 Arkansas legislators passed new statute of limitations laws. These laws enable lawyers handling sexual abuse claims in Arkansas to file cases against sexual predators, including clergy members, that may previously have been time-barred. Arkansas’ revival window opened on February 1, 2022 and will close on January 31, 2024.

Below you will find Arkansas lawsuits news & updates, as well as additional information on Arkansas’s statute of limitations laws. These laws are important because they dictate how long a lawyer handling an Arkansas sexual assault case has to file a claim on behalf of a survivor. In addition, we’ve compiled a list of Arkansas’s settlements and jury awards received by sexual abuse and assault survivors and a list of Arkansas’s ‘credibly’ accused priests released by the Diocese of Little Rock.

Arkansas has made improvements to its criminal SOL laws in recent years and also made significant changes to their civil SOL laws in April of 2021.

In 2013, Arkansas eliminated the criminal SOL for all sexual abuse felonies including: rape, sex assault, incest, pornography, and other sex crimes. 2013 marked the most important criminal SOL reform legislation the state has passed for sexual abuse survivors. Child USA, who has evaluated every state based on their criminal statute of limitation laws, gave Arkansas a Criminal SOL score of 3, on a 1-5 scale, where 5 is the highest. A score of 3 is defined as a criminal SOL eliminated for felonies only.

In 1993, Arkansas passed a law for survivors of child sex abuse allowing them to file claims against their abusers up to age 21 (age of majority, 18, plus 3 years) or from a 3-year ‘discovery’ rule, or 3 years from when the sexual abuse was first ‘remembered’ by a survivor. In April of 2021, Arkansas legislators passed the Justice for Vulnerable Victims of Sexual Abuse Act which greatly improved clergy abuse survivors’ rights. First, it extended the age cap to which victims of sexual abuse can bring a claim from 21 years of age to 55. In addition, beginning February 1, 2022, a two-year revival window opened allowing survivors of sexual abuse in Arkansas the ability to file claims against their perpetrators and the institutions responsible, regardless of whether or not their previous statute of limitations had expired.

Child USA, who has evaluated every state based on their civil statute of limitation laws, gave Arkansas a Civil SOL Age Cap score of 4, on a 1-5 scale, where 5 is the highest. A score of 4 is defined as a civil SOL age cap of age 50 and older for survivors. In addition, Child USA gave Arkansas a Revival Law Ranking of 4, on a 1-5 scale. A score of 4 for revival law is defined as ‘Revival window for 2 or more years or revival up to age 55, for claims against all type of defendants.

If you or someone you love was sexually abused or assaulted in Arkansas, contact us now. Those sexually abused as a minor likely still have a claim against their abuser, no matter how long ago the abuse occurred. Even if the abuser is deceased, you may still have a claim against the organization responsible. Don’t wait to file your claim! The revival window in Arkansas will close on January 31, 2024.

The Roman Catholic Diocese of Little Rock and the Society of Mary, or Marists, together have paid out more than $2 million to sexual abuse survivors from Arkansas. Below outlines the details of the compensation for survivors.

November 1993 – A federal jury awarded $1.5 million in damages to a sexual abuse survivor from Blytheville, Arkansas. The lawsuit originated from a claim that the plaintiff was sexually abused at Eaker Air Force Base in Blytheville, Arkansas when she was 8 years old by Rev. Timothy Sugrue who was the chaplain at the base where her father was stationed.

June 2019 – The Diocese of Little Rock agreed to pay $790,000 to 5 survivors of sexual abuse committed by a diocesan priest in the 1970s. The survivors claimed they were sexually abused by Rev. John J. McDaniel at Our Lady of the Holy Souls Catholic Church in Little Rock when they were students at the school. The attorney of the survivors had this to say regarding the settlement, “We are grateful to the survivors of Rev. John J. McDaniel who stepped forward, sought justice and exposed this predator. We believe that other victims of sexual violence will feel vindication because of their courage, and we hope this settlement brings them some measure of healing.”

*The settlements listed above are offered for educational purposes only and do not guarantee any future outcome or settlement. Each legal situation is different, and past performance does not guarantee future results. We do not maintain that is a full list of all settlements in the state of Arkansas but merely a grouping of those we choose to share on our website. Please contact us if you would like additional settlements included or if you notice any inaccuracies on our site. We strive to provide our viewers the most up to date and accurate information as possible.

According to its website, the Diocese of Little Rock states the following regarding the clergy who have been credibly accused of sexual abuse of a minor, “This list is being published as part of the Diocese of Little Rock’s ongoing commitment to transparency and to encourage persons sexually abused by clergy or by anyone working on behalf of the Church to come forward. The individuals named in this list have served in Arkansas at some point in time, but that does not mean that they abused minors during their service here in Arkansas. In addition, although this list includes their assignments, that does not mean that there are allegations of abuse at each place.”

The following list on the Diocese of Little Rock’s website was last updated on February 8, 2019 and names the following priests as having been ‘credibly accused of sexually abusing minors in Arkansas’.

Beginning in November, sexual abuse survivors in Arkansas will be able to file a civil suit against those responsible, regardless of how long ago the abuse occurred. Click the headline to read more…