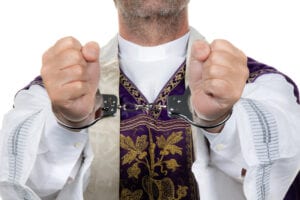 The sad reality is that clergy abuse is still an issue for the Catholic Church. Several parishes in northern Ohio, including those in the Toledo, Finlay, and Van Wert areas were reminded of that reality when on August 18, 2020, Father Michael Zacharias was arrested and charged with sex trafficking. He was placed under arrest by members of the Northwest Ohio Child Exploitation and Trafficking Task Force as he walked home after celebrating Mass at St. Michael the Archangel Parish in Findlay, Ohio. The charges against Zacharias include coercion and enticement, sex trafficking of a minor, and sex trafficking of an adult by force, fraud, or coercion.

Authorities stumbled upon the abuse while investigating a drug possession case. The suspect in that case allowed authorities to search his phone which uncovered text messages between the suspect and Father Zacharias. During the investigation, it became evident that Father Zacharias used his position of power to groom at least two victims so that he could sexually abuse them. Grooming is a process by which a perpetrator generally targets an individual and gradually gains trust or a connection with the intent to sexually abuse. The abuser often provides special attention or gifts. In this case, Zacharias provided money to his victims so they could buy drugs to fuel their addictions.

According to court documents, Father Zacharias met both victims in Toledo. The first victim, the individual from the drug investigation, he met in 6th grade. Father Zacharias knew of the drug addiction and used it to manipulate the victim. He offered him money so that he could buy drugs in exchange for allowing certain sexual acts to be performed. This manipulation started when the victim was a minor and continued into adulthood.

While studying to become a priest, Zacharias met his other victim who, at the time, was a first grader at St. Catherine’s Catholic School in Toledo, Ohio. The abuse started in the ninth grade when this victim also became addicted to drugs. Father Zacharias used a similar tactic and started to exploit the minor’s drug addiction, providing money in exchange for sexual acts.

Since his arrest, Father Zacharias has remained in federal custody. A 10-count indictment, including sex trafficking, was handed down by a federal grand jury in Cleveland in October. The indictment paves the way for the federal government to pursue criminal charges.

If you or a loved one were a victim of sexual abuse within any of the Ohio Dioceses, contact our firm today. Our law firm handles Ohio sexual abuse lawsuits and can help you understand how long you have to file a clergy abuse claim in the state of Ohio. Call us now at 1-800-941-7209 for a FREE and PRIVATE consultation.