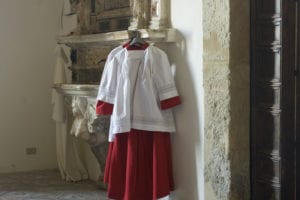 Catholic priest Lawrence Lovell, or ‘Father Larry”, was at the center of a priest sex abuse case filed against the Archdiocese of Los Angeles and the Claretian Missionaries which resulted in a $1.9 million dollar settlement. The victim, Richard Barrios, said the sexual abuse occurred from 1982-1984 when he was an altar boy at San Gabriel Mission Church.

Barrios did notify authorities several years after the abuse began. The church’s response was to offer Barrios just six months of paid counseling. The settlement was made possible through legislative reforms in California which gives more time for childhood sexual abuse survivors to come forward and file a claim. This was the first settlement with a Catholic diocese in California since the Assembly Bill No. 218 was passed.

Unfortunately, and somewhat typical of Catholic priests guilty of sexual abuse of a minor, Barrios wasn’t Lawrence Lovell’s only victim. In 1986 he was convicted of abusing a 14-year-old boy in Los Angeles. He was removed from the ministry and put on 3 years probation. Then in 2003, he was indicted on sexual abuse charges in Arizona, where’d he been assigned to Sacred Heart Parish in Prescott. He took plea deals and is currently in the Rehabilitation and Reentry program within the Arizona Department of Corrections. Lawrence Lovell is expected to be released in March of 2021.

If you or a loved one were a victim of sexual abuse within the Archdiocese of Los Angeles or any other California dioceses, contact our firm today. Our law firm handles California sexual abuse lawsuits and can help you understand how long you have to file a clergy abuse claim in the state of California. Call us now at 1-800-941-7209 for a FREE and PRIVATE consultation.