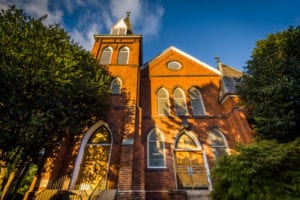 The North Carolina Dioceses hired independent investigators to review files of over 1600 church personnel which began over a year prior to the release. Of those 1600 records, 14 clergy were deemed to be credibly accused. The Diocese defines credibly accused as “one that has the semblance of truth; one supported by information worthy of belief. It is not a finding of guilt.” Of those 14, 2 were convicted, 9 are deceased, and the remaining 3 were either removed, dismissed, or left the ministry. A statement released by Bishop Peter Jugis said “To all who have been victimized by Catholic clergy, I apologize on behalf of the diocese and express to you personally my heartfelt sorrow for the physical, emotional and spiritual pain you have suffered.”

The Charlotte Diocese released the names of credibly accused priests years ago. This list included 6 clergy members who worked in the area prior to the formation of the Charlotte Diocese, as well as the names of 23 clergy who were accused of sexual misconduct while working for the Diocese in other locations. Bishop Jugis’ decision to release the names came with mixed responses as many argued it took too long for the church to do so. A group from Charlotte, known as the “Survivors Network of Those Abused by Priests” said that the Archdiocese should have released the list of offenders years ago when the Boston Globe exposed the abuse of children by Catholic priests and the church’s attempts to cover it up, in the now famous ‘Spotlight’ article. David Fortwengler of Gaffney, South Carolina stated “I’m not going to give them a gold star for doing what they should have done 18 years ago. But a list is better than no list.”

If you or a loved one were a victim of sexual abuse within the Dioceses of Charlotte or the Diocese of Raleigh, contact our firm today. Our law firm handles North Carolina sexual abuse lawsuits and can help you understand how long you have to file a clergy abuse claim in the state of North Carolina. Call us now at 1-800-941-7209 for a FREE and PRIVATE consultation.