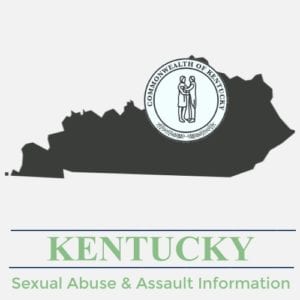 Kentucky has made only very minor changes to its statute of limitations (SOL) laws regarding child sex abuse since 2002. However, in 2021, Kentucky passed legislation aimed at improving the SOL laws for sex abuse survivors. Below you will find Kentucky lawsuits news & updates, as well as additional information on Kentucky’s statute of limitations laws. These laws are important because they dictate how long a lawyer handling a Kentucky sexual assault case has to file a claim on behalf of a survivor. In addition, we’ve compiled a list of Kentucky’s settlements and jury awards received by sexual abuse and assault survivors.

In 2021, Kentucky passed a unique revival window. Unlike other states who have enacted revival windows based on age, and/or a finite period of time, like 1-3 years, Kentucky’s revival window only allows child sex abuse survivors the ability to bring a claim if that claim was time-barred as of March 23, 2021 and if they are brought within 5 years of when their SOL expired.

In addition, newly passed legislation also further defines the discovery rule. The discovery rule allows the calculation of the statute of limitations to start on the date the abuse was discovered, or the date in which an injury can be linked to the abuse; allowing a civil claim to be brought against an abuser sometimes much later. In 2017 Kentucky extended the civil SOL to age 28. The law also allows a claim to be brought up to 10 years from discovery, or 10 years after the conviction of the defendant for child sex abuse; whichever is longer. In 2021, Kentucky clarified that the 2017 10-year discovery rule also applies to claims against other individuals and entities, and applies retroactively.

Go to our main sexual abuse page to learn more about the process of filing a priest clergy abuse claim.

The Diocese of Covington and Louisville Kentucky have collectively agreed to pay out over $110 million to survivors of childhood sexual abuse committed by priests, clergy and other church members. While the totals paid by the Dioceses in the state of Kentucky are staggering, they have yet to release the names of all credibly accused priests to the public.

June 2003 – The Roman Catholic Diocese of Louisville agreed to pay $25,700,000 to settle 240 lawsuits which named 34 priest and church workers for child sex abuse. One of those priests, Rev. Louis E. Miller was accused by more than 90 people of sexual abuse between the 1950s and 1990. Miller pled guilty to 50 counts of molesting children and was sentenced to 20 years in prison in Jefferson County. Also named was Rev. Arthur L. Wood who was accused by 39 plaintiffs and Rev. Daniel Clark who was accused in 19 lawsuits.

October 2003 – The Diocese of Covington agreed to settle sex abuse claims of 27 victims for $5,200,000 against at least 6 different priests. The priests accused who were made public included Rev. Leonard Nienaber, Rev. Joseph Pilger, and Rev. Earl Bierman. Nienaber was convicted of 10 abuse charges in 1993 and later sentenced to 10 years in a treatment center in Missouri. Both Pilger and Bierman were also convicted of sexual abuse.

June 2005 – The Roman Catholic Diocese of Covington, KY agreed to settle a class-action lawsuit for $120,000,000, making it the largest settlement in U.S. history at the time. It is important to note however that the amount the Diocese actually had to pay was dependent on how many victims came forward. The total amount to be paid was later reduced to $85,000,000 and any unused money was to be returned to the Diocese. The agreement divided the victims into 4 groups depending on the circumstances of the abuse and were paid varying amounts ranging from $5,000 to $450,000, minus the court-ordered attorneys’ fees.

*The settlements listed above are offered for educational purposes only and do not guarantee any future outcome or settlement. Each legal situation is different, and past performance does not guarantee future results. We do not maintain that is a full list of all settlements in the state of Kentucky but merely a grouping of those we choose to share on our website. Please contact us if you would like additional settlements included or if you notice any inaccuracies on our site. We strive to provide our viewers the most up to date and accurate information as possible.

20 priests have been named on the Diocese of Lexington’s list of clergy accused of sexual abuse. Click the headline to read more…

Two former FBI agents spent close to a year reviewing documents related to abuse of minors within the Diocese of Covington. The list contains 59 priests. Click the headline to read more…