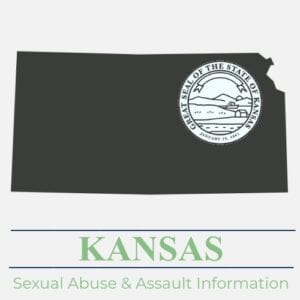 Kansas’ civil and criminal statutes of limitations (SOL) don’t provide much time for victims of child sexual abuse to receive justice. However, potential new legislation was introduced to the state’s Legislature in 2021 which could provide an avenue for child sex abuse survivors to pursue civil claims. This new legislation would eliminate the civil SOL and open a permanent revival window for claims that were not previously time-barred prior to 1992. Civil SOL laws enable lawyers handling sexual abuse claims in Kansas to file cases against sexual predators, including clergy members, and the Catholic Church.

Below you will find Kansas lawsuits news & updates, as well as additional information on Kansas’s statute of limitations laws. These laws are important because they dictate how long a lawyer handling Kansas sexual assault cases has to file a claim on behalf of a survivor. In addition, we’ve compiled a list of Kansas settlements received by sexual abuse and assault survivors and a list of Kansas’s ‘credibly’ accused priests released by Kansas’s Dioceses.

Kansas’ civil and criminal statutes of limitations (SOL) laws need to be improved in order to help survivors of sexual abuse receive justice. However, there is potentially some hope on the horizon as a bill which would eliminate the civil SOL for childhood sexual abuse victims and open a permanent revival window for claims that were not expired prior to 1992 was introduced to the state’s Legislature in 2021.

In Kansas, there is no criminal SOL for felony rape and aggravated sodomy. The criminal SOL for other sexually violent crimes is age 28 and for misdemeanors it is 5 years after the crime occurred. Kansas does have a limited DNA rule which is one year after the perpetrator is identified by DNA testing. Child USA, who has evaluated every state based on its criminal statute of limitations laws, gave Kansas a Criminal SOL score of 3, on a 1-5 scale, where 5 is the highest. A score of 3 is defined as a criminal SOL elimination for some/all felonies only.

In Kansas, the current civil SOL for child sex abuse claims is age 21. There is a discovery rule statute for child sex abuse claims which gives victims “three years from the date the person discovers or reasonably should have discovered that the injury or illness was caused by childhood sexual abuse to file a claim.” However, claims which were already time barred by 1992 do not get the benefit of this discovery rule. Child USA, who has also evaluated every state based on its civil statute of limitation laws, gave Kansas a Civil SOL Age Cap score of 1, on a 1-5 scale, where 5 is the highest. A score of 1 is defined as a civil SOL age cap of age 25 and younger.

1952-2003 – A study done by the John Jay College of Criminal Justice in New York reported that the Diocese of Wichita paid out just $1 million in settlements and therapy costs to survivors of childhood sexual abuse by Diocese clergy. During that 50-year time period, a total of 33 people made allegations against 9 priests from that Diocese. Also, during that 50-year period, the Diocese of Dodge City paid just $11,000 in total to three victims who claimed they were abused between the 1950s and 1980.

The settlement(s) listed above are offered for educational purposes only and do not guarantee any future outcome or settlement. Each legal situation is different, and past performance does not guarantee future results. We do not maintain that is a full list of all settlements in the state of [State] but merely a grouping of those we choose to share on our website. Please contact us if you would like additional settlements included or if you notice any inaccuracies on our site. We strive to provide our viewers the most up to date and accurate information as possible.

Catholic Dioceses in Kansas have released the names of priests and clergy members who they deemed to be ‘credibly accused’ of sexual abuse of a child.

The lists below will be updated as litigation or investigations are concluded so that new names of credibly accused priests in Kansas can be added.

A two-year investigation by the Kansas Bureau of Investigation received over 205 reports of clergy sexual abuse within the state’s Catholic Dioceses. Click the headline to read more…

The Kansas Court of Appeals upheld a lower court ruling that the statute of limitations did not bar a childhood sexual abuse claim from being brought against the Archdiocese.Click the headline to read more…