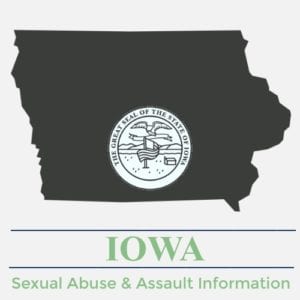 Below you will find more information on Iowa’s statute of limitations laws. These laws are important because they dictate how long a lawyer handling an Iowa sexual assault cases has to file a claim on behalf of a survivor. In addition, we’ve compiled a list of Iowa settlements and jury awards received by sexual abuse and assault survivors.

In May of 2021, Iowa eliminated the statute of limitations (SOLs) for felony child sex abuse crimes. Child USA, who has evaluated every state based on their criminal statute of limitation laws, gave Iowa a Criminal SOL score of 5, on a 1-5 scale, where 5 is the highest. A score of 5 is defined full elimination for all felonies and misdemeanors.

In Iowa, a victim of child sex abuse only has one year after turning 18 to file a civil claim against his/her abuser. However, Iowa does have a 4-year discovery rule, which delays the start of the statute date if an injury can be linked to the abuse. As an example, if a 45 year old man was recently diagnosed with PTSD, and that diagnosis is related to being sexually abused as a child, he may still be able to bring a civil claim against his abuse even though he is older than 19 years of age. In addition, the discovery rule extends to 5 years after the last treatment date if the abuse was by a therapist or counselor. In 2021, legislators extended the civil statute of limitations laws for child abuse victims who were abused by an ‘adult providing training or instruction’, giving them an additional 5 years after the treatment ends or after the victim was last in school, to file a civil claim.

Child USA, who has also evaluated every state based on their civil statute of limitation laws, gave Iowa a Civil SOL Age Cap score of 1, on a 1-5 scale, where 5 is the highest. A score of 1 is defined as a civil SOL age cap of 25 years old or younger for survivors.

If you or someone you love was sexually abused or assaulted in Iowa, contact us now. Due to Iowa’s discovery rule, those sexually abused as a minor may still have a claim against their abuser, no matter how long ago the abuse occurred. Even if the abuser is deceased, you may still have a claim against the organization responsible.

October 2004 – The Roman Catholic Diocese of Davenport agreed to settle 37 claims of sexual abuse which occurred during the 1950s and 1960s for $9,000,000. The names of 5 of the 11 priests named by the victims were released: Francis E. Bass, William F. Wiebler, Theordore Anthony Geerts, Drake R. Shafer and Rev. James Janssen.

May 2005 – A jury awarded damages in the amount of $1,890,000 to the nephew of Rev. James Janssen admitted to sexually abusing his nephew in 1950s but later recanted on the witness stand. Janssen was removed from the priesthood by the Vatican in 2004.

February 2006 – The Archdiocese of Dubuque agreed to pay $5,000,000 to 20 victims that were molested by clergy in northeast Iowa dating back 50 years. In addition to the settlement funds, the archdiocese also agreed to pay for therapy for victims and their spouses. The names and assignments of those priests credibly accused of sexual abusing children was also released. The names are below:

September 2006 – A jury awarded a victim $1,500,000 from the Diocese of Davenport asserting claims of sexual abuse by Monsignor Thomas J. Feeney. The victim’s case further argued that the Dioceses was negligent in supervising Feeney, that they knew about the abuse and did nothing to stop it. Thomas Feeney died in 1981. As a result of this jury award the Davenport Diocese filed for bankruptcy one month later.

April 2008 – The Archdiocese of Dubuque agreed to settle claims brought by 18 victims of sexual abuse for $4,700,000 and pay for therapy sessions for each victim. The settlement averages ~$260k per victim however the actual amount received by each victim will vary depending on the circumstances of the abuse. The claims were against 9 priests, all listed below:

*The settlements listed above are offered for educational purposes only and do not guarantee any future outcome or settlement. Each legal situation is different, and past performance does not guarantee future results. We do not maintain that is a full list of all settlements in the state of Iowa but merely a grouping of those we choose to share on our website. Please contact us if you would like additional settlements included or if you notice any inaccuracies on our site. We strive to provide our viewers the most up to date and accurate information as possible.

Governor Kim Reynolds of Iowa, signed Senate File 562 into law which removes the criminal statute of limitations for sexual abuse and exploitation of a minor. Click the headline to read more…

Due to Allegations of Sexual Abuse, School Suspends Priest

The Diocese of Des Moines suspended Father Robert Grant, better known as ‘Father Bud’, after allegations of sexual misconduct were made by a former student at St. Alberts High School. Click the headline to read more…