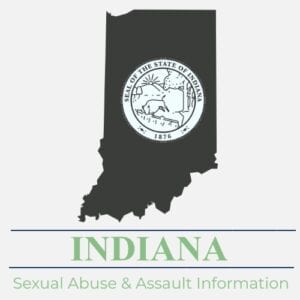 While Indiana has extended its criminal statute of limitations (SOL) laws since 2002, the state’s civil SOL has not provided survivors with much of an avenue for justice. However, change could be on the horizon for the state’s feeble civil SOL, as a bill was introduced to the Legislature which would eliminate the civil SOL for injuries resulting from child sex abuse as well as open a permanent revival window for all expired claims. These laws enable lawyers handling sexual abuse claims in Indiana to file cases against sexual predators, including clergy members, and the Catholic Church.

Below you will find Indiana lawsuits news & updates, as well as additional information on Indiana’s statute of limitations laws. These laws are important because they dictate how long a lawyer handling Indiana sexual assault cases has to file a claim on behalf of a survivor. In addition, we’ve compiled a list of Indiana settlements received by sexual abuse and assault survivors and a list of Indiana’s ‘credibly’ accused priests released by Indiana’s Dioceses.

Indiana has made some progress in the past decade towards helping survivors of sexual abuse get criminal justice by extending its criminal statute of limitations for child sexual abuse crimes. However, the state hasn’t made any changes to its civil statute of limitations (SOL) laws for child sexual abuse since 2013. There is potentially some hope on the horizon as a bill was introduced to the Legislature which would eliminate the civil SOL for injuries resulting from child sex abuse as well as open a permanent revival window for all expired claims.

Indiana eliminated the criminal SOL for Class A felony rape, as well as felony child sex trafficking. However, for sexual conduct with a minor, child solicitation, child seduction, child molesting, and incest, the criminal SOL ends after the victim turns 31 years old. Child USA, who has evaluated every state based on their criminal statute of limitations laws, gave Indiana a Criminal SOL score of 3, on a 1-5 scale, where 5 is the highest. A score of 3 is defined as a criminal SOL elimination for some/all felonies only.

In Indiana, the civil SOL only runs to age 20. For civil actions, Indiana’s discovery rule is 7 years from accrual for child sex abuse claims. Under the state’s common law discovery rule, a cause of action accrues when “the plaintiff knew or, in the exercise of ordinary diligence, could have discovered that an injury had been sustained as a result of the tortious act of another.”

In 2021, Indiana legislators introduced a new SOL bill that would open a permanent revival window for all expired claims. Note however that the bill excludes children who were sexually abused at a health facility.

Child USA, who has also evaluated every state based on their civil statute of limitation laws, gave Indiana a Civil SOL Age Cap score of 1, on a 1-5 scale, where 5 is the highest. A score of 1 is defined as a civil SOL age cap of age 25 or younger. Currently, Indiana does not have a revival law, but a bill was introduced to the Legislature which would eliminate the civil SO L for injuries resulting from child sex abuse as well as open a permanent revival window for all expired claims.

If you or someone you love was sexually abused or assaulted in Indiana, contact us now. Due to Indiana’s pending legislation and the state’s discovery rule, those sexually abused as a minor may still have a claim against their abuser, no matter how long ago the abuse occurred. Even if the abuser is deceased, you may still have a claim against the organization responsible.

May 2010 – The Roman Catholic Archdiocese of Indianapolis agreed to pay $199,000 to settle claims by a man who said Rev. Harry Monroe sexually abused him while both were at St. Catherine Catholic Church on the city’s Southside in the late 1970s. The man claimed that some of the abuse took place on overnight camping and other trips with Monroe. Part of the settlement includes a public apology from the archdiocese.

The settlements listed above are offered for educational purposes only and do not guarantee any future outcome or settlement. Each legal situation is different, and past performance does not guarantee future results. We do not maintain that is a full list of all settlements in the state of Indiana but merely a grouping of those we choose to share on our website. Please contact us if you would like additional settlements included or if you notice any inaccuracies on our site. We strive to provide our viewers the most up to date and accurate information as possible.

Catholic Dioceses in Indiana have released the names of priests and clergy members who they deemed to be ‘credibly accused’ of sexual abuse of a child.

The lists below will be updated as litigation or investigations are concluded so that new names of credibly accused priests in Indiana can be added.

Check back for recent news related to Indiana’s sexual abuse and assault laws.