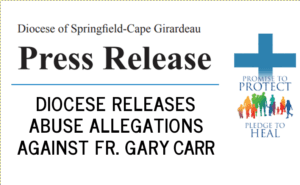 In April, the Diocese of Springfield-Cape Girardeau issued a press release stating that an allegation of physical/sexual misconduct against Father Gary Carr met the criteria for publication. In July, the diocese issued a second release finding that three more allegations against Carr also passed the threshold for publication. All four allegations were made by men who claim that Fr. Carr made inappropriate physical/sexual contact with them when they were boys.

Each of the allegations was reviewed by the Diocesan Safe Environment Review Board to determine whether or not it met the prevailing standard of “Semblance of Truth”. The U.S. Conference of Catholic Bishops defines this standard as an allegation that “is not manifestly false or frivolous.” Since each allegation was found to have met this standard, the diocese made them public.

The Diocese of Springfield-Cape Girardeau did notify local county prosecutors of the allegations for possible criminal charges. However, Father Carr has yet to be charged criminally.

While these particular allegations of abuse occurred in Missouri, Father Carr served outside the state as well. The concern is that other incidents of physical/sexual misconduct could have occurred elsewhere. The diocese provided the following list of Father Carr’s pastoral appointments:

The press releases from the Diocese of Springfield-Cape Girardeau can be viewed here; April press release, July Press Release

If you or a loved one were a victim of sexual abuse within the Diocese of Springfield-Cape Girardeau or any other Missouri diocese, contact our firm today. Our law firm handles Missouri sexual abuse lawsuits and can help you understand how long you have to file a clergy abuse claim in the state of Missouri. Call us now at 1-800-941-7209 for a FREE and PRIVATE consultation.