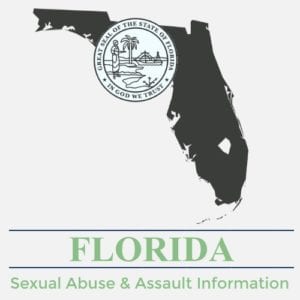 Florida is not known for being a very victim friendly state with regards to sexual abuse and assault laws. While there have been efforts to change legislation and help survivors of sexual abuse get justice against their abusers in the courts, the state still has a long way to go to help survivors get the justice they deserve. However, some of the state’s existing laws do enable lawyers handling sexual abuse claims in Florida to file cases against sexual predators, including clergy members, and the Catholic church.

Below you will find Florida lawsuits news & updates, as well as additional information on Florida’s statute of limitations laws. These laws are important because they dictate how long a lawyer handling Florida sexual assault cases has to file a claim on behalf of a survivor. In addition, we’ve compiled a list of Florida settlements received by sexual abuse and assault survivors and a list of Florida’s ‘credibly’ accused priests released by Florida’s Dioceses.

Florida has made progress towards helping survivors of sexual abuse get justice by changing some of its statute of limitations (SOLs) laws for child sexual abuse for both criminal and civil claims. While the changes the state has made are a step in the right direction, a greater effort needs to be made to get more of the existing SOLs eliminated as well as opening up a revival window for claims that are currently time-barred.

In 2020, Florida eliminated the criminal SOL for felony sexual battery of victims under the age of 18. Child USA, who has evaluated every state based on their criminal statute of limitation laws, gave Florida a Criminal SOL score of 3, on a 1-5 scale, where 5 is the highest. A score of 3 is defined as a criminal SOL eliminated for felonies only.

In 2010, Florida eliminated the civil SOL for sexual battery offenses against victims under 16 years old. This new law also applied to non-expired claims that arose prior to the law being signed in July 2010. Unfortunately, a proposal to eliminate the civil SOL for sexual offenses against minors and adults as well as open a 1-year revival window did not pass in the Florida legislature.

Child USA, who has also evaluated every state based on their civil statute of limitation laws, gave Florida a Civil SOL Age Cap score of 5, on a 1-5 scale, where 5 is the highest. A score of 5 is defined as an eliminated SOL age cap for survivors.

If you or someone you love was sexually abused or assaulted in Florida, contact us now. Due to Florida’s elimination of some civil statute dates for childhood sexual abuse, those sexually abused as a minor may still have a claim against their abuser. Even if the abuser is deceased, you may still have a claim against the organization responsible. Don’t wait to file your claim!

April 2004 – The Diocese of St. Petersburg paid $1.075 million to settle claims brought by a dozen men who said they were molested by priest Robert Schaeufele beginning in the mid-1970s. The boys were between the ages of 9-14 when the abuse occurred. Schaeufele was sentenced to 30 years in prison in 2003 after he pleaded guilty to charges he sexually abused three other boys.

September 2004 – The Archdiocese of Miami agreed to pay a total of $3.4 million to settle almost two dozen lawsuits brought by former altar boys and other youths who accused Catholic priests of sexually abusing them decades ago. The priests named as the alleged abusers in these settlements include: Rev. Ernesto Garcia-Rubio, Rev. Alvaro Guichard, Rev. Ricardo Castellanos, Rev. Joseph Cinesi, Rev. Joseph Huck.

September 2005 – The Dioceses of Orlando and St. Augustine combined to pay $1.5 million to settle sexual abuse claims brought by three former altar boys who alleged they were molested by two priests “countless times.” The boys’ ages ranged from 11-15 years old during the abuse which occurred in the late 1960s and early 1970s. The two priests named as the abusers were Rev. Vernon F. Uhran and Rev. Hubert Reason.

July 2007 – The Archdiocese of Miami reached a confidential settlement with a man who claimed Rev. Anthony Mercieca fondled and performed oral sex on him when he was an altar boy about 30 years ago. The man was 12-13 years old when the abuse occurred.

January 2013 – The Archdiocese of Miami settled a claim with a former altar boy who said Rev. Rafael Escala sexually abused him as a teenager. Terms of the settlement were undisclosed. The abuse occurred in the late 1980s after Escala caught the boy stealing $60 from the collection. Escala used the threat of notifying the police or the boy’s parents to keep him quiet about the abuse.

August 2014 – The Diocese of Venice agreed to a six-figure settlement with a man who claimed he was sexually abused by Rev. Jean Ronald Joseph when he was just sixteen-years-old. The agreement occurred only after the victim’s attorney received confidential documents from a source that showed the church knew Joseph had abused the boy. The victim’s attorney said that the church should have provided this information a year earlier when it concluded its investigation of Joseph.

The settlements listed above are offered for educational purposes only and do not guarantee any future outcome or settlement. Each legal situation is different, and past performance does not guarantee future results. We do not maintain that is a full list of all settlements in the state of Florida but merely a grouping of those we choose to share on our website. Please contact us if you would like additional settlements included or if you notice any inaccuracies on our site. We strive to provide our viewers the most up to date and accurate information as possible.

Catholic Dioceses in Florida have released the names of priests and clergy members who they deemed to be ‘credibly accused’ of sexual abuse of a child.

The lists below will be updated as litigation or investigations are concluded so that new names of credibly accused priests in Florida can be added.

Check back for recent news related to Florida’s sexual abuse and assault laws.