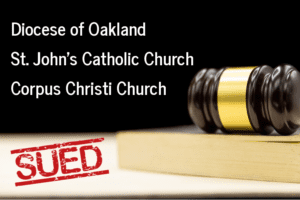 The attorney for ‘John Doe’, a sexual abuser survivor who wished to keep his identity concealed, file a complaint at the Alameda County Superior Court against the Diocese of Oakland, St. John’s Catholic Church in San Lorenzo, and Corpus Christi Church in Fremont, accusing them of negligence in protecting children from predator priests.

While Rev. David Mendoza serves his time in prison, the attorney for John Doe now is aiming to hold the Oakland Diocese, St. John’s Catholic, and Corpus Christi Church accountable. In an interview with The Mercury News, the attorney states, “Our allegation is that the church had many opportunities to prevent this from happening, and once it started happening, to end it”.

This isn’t the first time the Diocese of Oakland has dealt with sexual abuse and pedophile priests. In 2005 the Oakland Diocese agreed to a settlement of $56.4 million to compensate 56 childhood abuse victims. And while many of the allegations made are historical in nature, the number of sexual abuse survivors who are coming forward to make claims against their abusers and the organizations responsible, continues to grow.

The attorney for John Doe in the same interview additionally remarked, “…they [dioceses and churches] can’t keep turning a blind eye to the abuse that’s happening over and over again, always to vulnerable children, and generally from families who are so committed to the church they have a hard time believing that a priest would do the kind of things that this priest did.”

Looking for a Sexual Abuse Lawyer for a Claim Against the Diocese of Oakland?

If you or a loved one were a victim of sexual abuse within the Diocese of Oakland or any other California diocese, contact our firm today. Our firm handles California sexual abuse lawsuits and can help you understand how long you have to file a clergy abuse claim in the state of California. Call us now at 1-800-941-7209 for a FREE and PRIVATE consultation. Don’t wait; your time to file a claim may be limited.