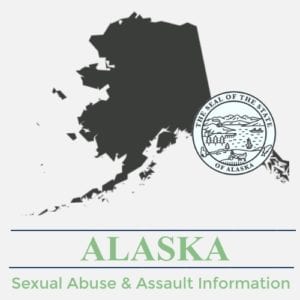 Alaska has worked to make several changes to its legislation in order to help survivors of sexual abuse and assault get justice against their abuser, while also allowing for compensation. These laws enable lawyers handling sexual abuse claims in Alaska to file cases against sexual predators, including clergy members, and the Catholic church.

Below you will find Alaska lawsuits news & updates, as well as additional information on Alaska’s statute of limitations laws. These laws are important because they dictate how long a lawyer handling an Alaskan sexual assault case has to file a claim on behalf of a survivor. In addition, we’ve compiled a list of Alaska’s settlements and jury awards received by sexual abuse and assault survivors.

Alaska has made several changes to its sexual abuse and assault statute of limitation (SOL) laws starting in 2001. It began by removing SOLs for some crimes which included felony sexual abuse, and also civil claims which included sexual abuse, sexual exploitation and sex trafficking. It further expanded the list of claims covered in 2003 and then again in 2013. Additionally, Alaska is one of 12 states to introduce SOL reform legislation in 2020 that would eliminate criminal SOLs.

Alaska is recognized has having some of the more victim-friendly SOL laws in the country, however it has failed to pass any ‘window law’, allowing some lesser claims of sexual misconduct to be brought against the abuser either criminally or civilly, since 2002.

There is currently no SOL in Alaska for most child sex abuse crimes, with an SOL of 5 years for remaining felonies and misdemeanors. Child USA, who has evaluated every state based on their criminal statute of limitation laws, gave Alaska a Criminal SOL score of 4, on a 1-5 scale, where 5 is the highest. A score of 4 is defined as a criminal SOL eliminated for some felonies and misdemeanors.

In 2001, Alaska eliminated the civil SOL for felony sex abuse of a minor and felony sexual assault. And in 2003, they eliminated the civil SOL for unlawful exploitation of a minor and felony sex/human trafficking. Child USA, who has also evaluated every state based on their civil statute of limitation laws, gave Alaska a Civil SOL Age Cap score of 5, on a 1-5 scale, where 5 is the highest. A score of 5 is defined as an eliminated SOL age cap for survivors.

The number of claims of sexual abuse against the Diocese of Fairbanks, the Oregon Province (affiliated with Gonzaga University and responsible for ministries in Washington, Idaho, Oregon, Montana and Alaska), and the Alaskan Jesuits have been staggering. It is believed by some that priests and other clergy who were publicly accused of abusing a child (or children) in the past, in other areas of the country, were ‘relocated’ to Alaska due to its remote location. According to David Clohessy, the National director of Chicago-based Survivors Network of those Abuse by Priests in 2005, “I absolutely believe that church officials intentionally sent abusive priests to minor communities, transient communities, where kids may be less apt to tell and have less faith in the justice system.” Below we’ve listed some of the major settlements received by survivors of sexual abuse in Alaska.

April 2005 – A settlement of $1 million was paid by the Fairbanks Diocese and the Oregon Province to a woman abused by Rev. James Poole beginning in the 1970s. According to the victim, an Anchorage resident, the abuse started when she was 10-years old and continued until she was 19. Rev. James Poole later admitted to abusing the woman and was removed from ministry. He was sent to the Regis Jesuit Community where he was secluded and only allowed to leave under supervision. He died in March of 2018.

March 2007 – The Society of Jesus in Oregon and Alaska agreed to pay $1.96 million, plus counseling costs, to two men and two women as part of a settlement that accused Rev. James E. Jacobson of sexual abuse and rape.

November 2007 – 110 victims who were sexually abused while living in the remote regions of Northwest Alaska received a $50 million settlement from Jesuits. Their claims alleged that their communities were used as ‘dumping grounds’ for problem priests, specifically those previously accused of sexual abuse. The allegations were against 12 priests and 3 volunteers.

January 2010 – As part of a bankruptcy plan, the Catholic Diocese of Fairbanks paid $9.8 million to nearly 300 victims. The Fairbanks Diocese filed for bankruptcy in March of 2008 after over 100 lawsuits were filed against them related to sexual abuse and priest molestation. As part of the settlement, the Diocese was ordered to post on its website the names of all suspected abusers and “any other known perpetrators (admitted, proven or credibly accused), including deceased perpetrators.”The list includes:

Priests, Deacons, Brother, Sisters and lay persons who were accused by multiple victims:

Priests, Deacons, Brother, Sisters and lay persons who were accused by a single victim:

*The settlements listed above are offered for educational purposes only and do not guarantee any future outcome or settlement. Each legal situation is different, and past performance does not guarantee future results. We do not maintain that is a full list of all settlements in the state of Alaska but merely a grouping of those we choose to share on our website. Please contact us if you would like additional settlements included or if you notice any inaccuracies on our site. We strive to provide our viewers the most up to date and accurate information as possible.

Check back for recent news related to Alaska’s sexual abuse and assault laws.